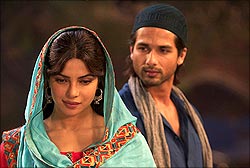 Three Times, that Taiwanese romance Kunal Kohli's Teri Meri Kahaani is speculated to be a remake of, could be compared to three pages of beautiful handmade paper with pressed flowers and subdued fragrance but no writing on them.

Almost like evocative visual poems that view the passage of romance between two individuals, played by same actors, through three discrete decades. Director Hou Hsiao-Hsien's 2005 film is imbued with reflective quietude and fragile, neglected interactions -- elements Bollywood so famously runs away from.

And so barring this interesting concept of three love stories positioned around similar decades: 1910, 1960 and 2012 (1911, 1966 and 2006 in the original), portrayed by the same set of leading actors, Kohli's confection does not bear any resemblance to the bare, ambient Three Times. As it so happens, this is not such a bad news after all.

In any case, premise has never been Kohli's forte; none of his creations are emblems of originality. Be it Mujhse Dosti Karoge (The Truth About Cats and Dogs), Hum Tum (When Harry Met Sally), Fanaa (Eye of the Needle) or Thoda Pyaar Thoda Magic (Mary Poppins, Nanny McPhee), they've all plucked leaves (or leaflets) out of someone else's book, not so much as a reference than as reproduction. Yet, he's always managed to pick out an enterprising cast and gloss up a dumbed-down screenplay to dole out a watchable rom-com.

Teri Meri Kahaani, with its breezy running time (122 minutes) and frothy leads, continues the tradition in a much better manner than I anticipated. Although it begins with a Khushi (that Fardeen Khan-Kareena Kapoor date flick where she dumps him coz he's ogling at her navel in pre-Rowdy Rathore days with no Akshay Kumar to blame) reminiscent intro -- two babies, religiously wrapped in distinguishing blue and pink sheets, make eye contact only to go their separate ways.

Wince? Yes. Not for too long.

Cut to Shahid Kapoor sprinting like a mad cow to scramble inside a 1960s style first-class compartment of a steam engine train, bumping into the coquettish Priyanka Chopra and, bingo! It's one of the most amusing filmi scenes I've seen in a while. Seasoned with oodles of charm, it has some endearing Shammi Kapoor-Asha Parekh inspired banter amplified by that vigorous, concrete chemistry (of Kaminey fame) between Shahid and Priyanka. It's not a histrionics-oriented part but the two infuse it with expected charisma and unexpected restraint.

She's an actress, browsing through a recent issue (please to overlook the aged, yellowish pages) of Filmfare, instructing her Man Friday to make the visitor wait for five minutes (oh how inflation has affected all quarters) before sending him in. He's a struggling musician trying to get break into films. She's spoilt, he's straightforward. It's a familiar equation but the two play it out with such vibrant conviction, it's easy to buy if not conform to. There's also a cameo involved here with another actress but I'll leave that for you to discover.

Other notables include Kohli and his production designer Muneesh Sappel's (Pinjar, Paheli, Dor) efforts to transform Mumbai into Bombay with its leisurely-moving trams, glowing Phoenix Mills pronouncements (while it was still in the business of making cloth not malls and multiplexes)

or nod at the proud Maratha Mandir structure. Although it wears an advertising campaign aesthetic, the vintage, SFX-enhanced backdrop lends the retro theme a snappy touch if not the Farah Khan brand of wit.

The fashion, of course, like Om Shanti Om, is more on screen than off it. It always helps to have your protagonists related to show business. And so you have Shahid dressing up like Raj Kapoor meets Dev Anand and Priyanka channelling the fashionistas of the era, Asha Parekh, Sadhana and Mumtaz with her big hair and tightly wrapped saris baring a midriff that's more 90s than 60s.

2012 takes over the swinging sixties and you're back on WI-FI. Kohli makes note of our crazy dependency on gadgets in the current scenario with the inclusion of high-end electronics like tablets, smart phones alongside mandatory laptops and desktops in every single scene. There's a nice contrast to be found here since the digital-age dating is conducted in and around romantic poet Shakespeare's tourist-flocking birthplace Stratford-upon-Avon.

Again, this is a first-sight attraction between Krrish and, um, Radha (Seriously Kunal, snap out of yore, will ya?), which progresses through video chats, texting and Facebook status updates (and for once Shahid spells correctly). But mostly, this soufflésque affair offers just about enough eye candy and pleasantries despite its Friends-inspired set-up and some offensive depiction (by Bollywood standards) of cyber bullying to snub.

The 60s sequence is definitely my favourite of the lot, I say that with added certainty after viewing the third and final chapter, set in pre-Independence India, namely Sargodha, Lahore. Like the previous stories, there are no snarling bad guys, no distracting sub-plots but plain old lovey-dovey glances and impish smiles against picturesque outdoors captured with affection in Sunil Patel's camerawork.

Priyanka plays a 22-year-old unmarried girl, uncharacteristically liberated for 1910 if it wasn't for her constant giggling and blushing under the duppatta. Shahid's a loutish casanova sporting Shoaib Akhtar's hairstyle and spewing terrible shayari on his ready-for-consummation airhead ladyloves. Opposites attract in the time of revolution, which resembles a school-play musical what with the dim-witted angrez, an enduring Bollywood caricature and a large-scale jig inside a baloney prison. Too many songs, loud sentimentality and contrived writing relegate this one to a strictly corny status even as the two actors struggle in identifying or emulating the grace or gregariousness of a long-gone period.

The awkwardness isn't limited to the third's narrative alone. Kohli dilutes the chance of a wholesome, affable entertainer down by his predilection for risk-free conclusions. What's the point of telling three different love stories if you plan to give them a similar finish off? The whole exercise seems plain cosmetic. But till the point the make-up doesn't wear off, Teri Meri Kahaani is a far better film than I came to see. 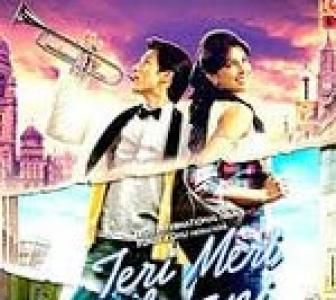 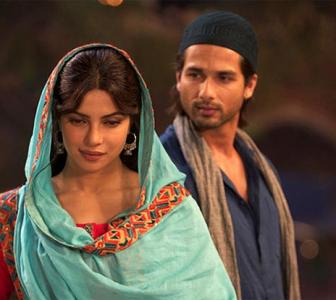 Shahid: Response for Teri Meri Kahaani has been wonderful 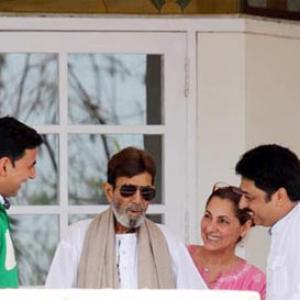 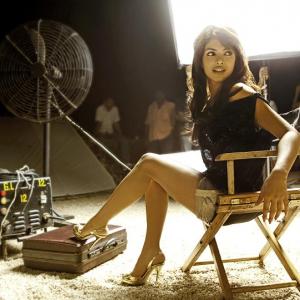