News
Business
Movies
Sports
Cricket
Get Ahead
Money Tips
Shopping
Sign in  |  Create a Rediffmail account
Rediff.com  » Movies » Nothing entertaining about this Paiyya

Nothing entertaining about this Paiyya 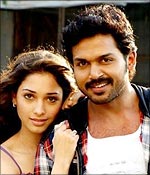 After weeks of flashy trailers, ads and news reports, Thiruppathi Brothers' and Cloud Nine's Paiyya (loosely translates, it means boy) is finally here. With Karthi finally donning the role of a commercial hero and Tamannaah adding a dash of glamour, not to mention Yuvan Shankar Raja's thumping music, Paiyya has raised expectations to almost breaking-point.

As to whether director N Lingusamy's most anticipated summer venture satisfied those expectations is something else altogether.

Lingusamy has the knack for taking a single plot-point and developing a plausible story-line out of it. This time, aided by dialogue-writer Brindasarathy, he's come up with an intriguing one-line: what happens when a guy falls for a girl at first sight and then suddenly finds himself as her escort on an unexpected road trip?

The situation certainly has enormous possibilities, and we're taken through a racy, fun, swift ride, beginning in Benguluru.

Shiva (Karthi) is a happy-go-lucky guy who does exactly as he pleases, which includes getting onto running buses and ignoring his father's calls. He has a loyal band of friends who're determined to get him a job somehow (there's no reason as to why they're so accommodating).

True to his character, though, Shiva catches sight of Charulatha aka Charu (Tamannaah) getting off a bus and immediately falls for her in jaw-dropping style. The fact that she looks charming, dressed in flattering costumes flaunting pretty pinks, greens and blues definitely helps.

Naturally, he misses the interview, much to his pals' (justified) irritation and other appointments, courtesy sudden glimpses of her at unexpected moments. The crowning glory comes when he's supposed to pick up a friend at the railway station, but ends up giving her a ride, instead. And to Mumbai, no less.

That Shiva's thrilled to be with her is obvious in his every move, smile and controlled ecstasy. Matters don't go so smoothly, of course. A gang follows Charu, driven by an angry, Telugu-speaking Amma, while another Mumbai gangster, Baali (Milind Soman), has his own agenda for Shiva. 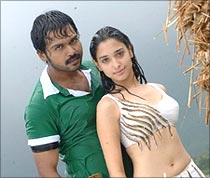 The first half is racy, peppy and enthusiastic: a matter-of-fact guy and a romantic, pretty girl are thrown together and, suddenly, everything -- starting from restaurant breaks, clothes and even filling petrol -- morphs from a mundane exercise to a thrilling adventure.

Yuvan Shankar Raja's melodious Thuli Thuli and Adada Mazhaida fill your ears, while Shiva smiles, dances, cracks jokes and falls in love. The build-up is exciting, as you wait for the inevitable mystery to unravel...

At which point everything falls flat.

After a series of serious roles that demand a lot of homework, it's natural to want to be part of a commercial venture and Karthi does his best with the character. To his credit, at no time does look strained. He even manages to carry off the stunts well.

The pity is, there's nothing for him to do. Bashing up a hundred goons with no appreciable background, meaning or logic is very tedious, even if Tamannaah does offer some glamorous respite.

Even she can do only so much, dancing in tight dresses faithfully, smiling, laughing or looking worried, as the scene demands.

Milind Soman, with his great screen presence, has been absolutely wasted. So is Jagan, who puts in a sparing appearance in the second half.

Madhi's camera captures the lead pair lovingly -- the location for the song Adada Mazhaida is fantastic -- while Rajeevan's neat artwork is evident in the number Suthude Bhoomi. But the film, finally screening at two-and-a-half hours is long; the editing department could have easily tightened things up.

Paiyya's biggest minus is Lingusamy's script. It starts out so very promisingly, only to fizzle out with no appreciable sequences in the second half. Logic, rationale and reasoning go for a toss; its all fisticuffs and bashing-up after a point.

Watch the movie only for Karthi's screen presence, pretty Tamannaah and Yuvan's songs. Otherwise, there's nothing very entertaining about this Paiyya. 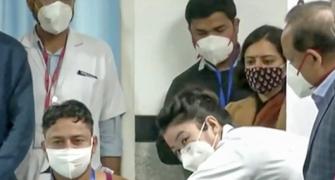 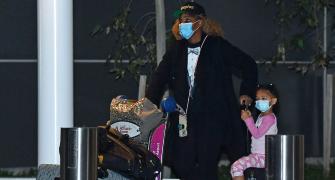 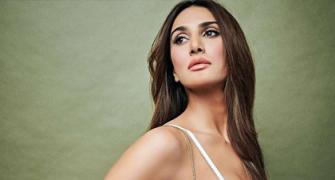