Review: Shubh Mangal Saavdhan is a winner all the way!

'With its fine zingers and feisty acknowledgement, Shubh Mangal Saavdhan does more for sex, both noun and verb, than any Hindi film can claim to in a long, long time,' notes Sukanya Verma. 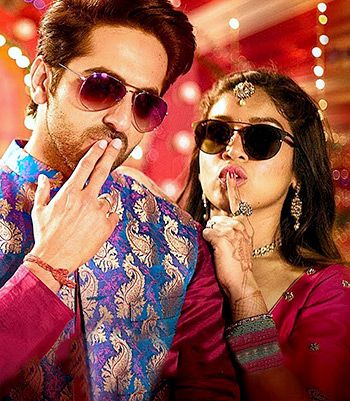 Is it the clamour of DDA flats?

Is it the Tiger balm bottle poking his butt?

Is it the onion kulcha he ate for lunch?

Not the foreplay Mudit (Ayushmann Khurrana) hoped for after he plants a hurried, awkward kiss on fiancée Sugandha's (Bhumi Pednekar) eager, excited lips.

But with his all-important 'little general' gone AWOL; the couple's chances of going all the way appear slim to none.

Director R Prasanna takes the opportunity to portray a frustrating reality in a fun light and broach on a touchy 'gents problem' like erectile dysfunction whilst dispensing with unreliable myths about manhood.

What's unique about this vivacious retelling of his 2013 Tamil treat Kalyana Samyal Sadham is how little it resembles the original outside its core.

Prasanna takes the same problem and weaves it around the conundrums faced by a brand new couple lending it a distinctly North India flavour and milieu but the well-reasoned shift of tone and sensibilities is unmistakable.

Kalyana Samyal Sadham is gentle to the point of diplomatic. The pair doesn't openly rebel against convention and receives unrealistic support from those likely to be offended.

This is a film about people who feel flesh and blood in all their unsophisticated glory, the words coming out of their mouth sound fresh, funny and fabulous and the politics or power play of their interactions, represented by two sides of a family on the brink of matrimonial merger, is familiar to anyone who's ever been subjected to or participated in such event.

Indian families are a genre by themselves.

Every single household here bears its own stamp of idiosyncrasy and fancifulness.

Like the icebreaker in the awkward Skype chat in the presence of Mudit and Sugandha's respective families, is when wall seepage is misconstrued to be a work of modern art.

When the groom's father looks at the baraat and wonders, 'Naach rahe hain ya maata chadh gayi hai?'

Every single scene of this freewheeling entertainer is peppered with witticism that deserves to be savoured and parroted. But it's not always an uproarious one-liner -- and rest assured they are there in abundance -- highlighting the broader picture of this wholeheartedly frolicsome rom-com.

Unlike the original where the girl embraces a regressive ritual and the guy says big deal, Mudit's melodramatic but meaningful outrage does well to challenge a problematic narrative. As does his definition of a true 'mard'.

Let's not kid ourselves; most men are sensitive when it comes to their willy.

In a business where movie stars wear padded underwear to look endowed, it's refreshing to come across an Ayushmann Khurrana whose willingness to be the poster boy for all those 'who can't get it up' is commendable.

Except it's not just nerve but a composite performance that conveys the sensitivity of a man craving to be everything his Bollywood-obsessed bride dreams of, the disappointment of a sufferer unable to find an effective cure and the irritation of a dulha surrounded by a family with infinite demands and insufficient patience.

His Dum Laga Ke Haisha co-star Bhumi Pednekar may have a wobbly Delhi accent but she compliments Ayushmann's vulnerability with a fire that's reminiscent of Shabana Azmi and a goodness that becomes Deepti Naval.

Every time she's on screen, it's easy to believe great things will happen -- races will be won, toilets will be built and Rocket Saiyyan will rise to the occasion. Also, I've yet to see someone blend algebra and aam papad so seamlessly in one sentence.

Prasanna gets equal support from his supporting cast of resourceful talents and effortless comic timing -- especially Brijendra Kala's patronising uncle and his yo-yo-like equation with his younger brother is a hoot to witness, Seema Pahwa's all-knowing Mummy, close on the heels of Bareilly Ki Barfi, once again steals the show and Anshul Chauhan's Katrina Kaif-resenting BFF is easily someone to watch out for.

The best part is how the script resists belittling Mudit's condition to insert crass innuendo.

With its fine zingers and feisty acknowledgement, Shubh Mangal Saavdhan does more for sex, both noun and verb, than any Hindi film can claim to in a long, long time.