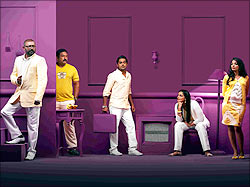 Director Aashiq Abu (of Daddy Cool fame) has put together the right ingredients in his new film Salt N' Pepper and come up with quite an interesting dish.

This is a love story of two people facing a mid-life crisis, who find a release for their frustrations in cooking.

Kalidasan (Lal), is an unkempt archaeologist who likes old things: he uses a car that went of fashion in the mid-eighties and is allergic to modern amenities like cell phones. When he does get round to using one, it turns out to be a call meant for a dosa joint with home delivery facility.

At the other end is Maya (Shwetha Menon), who has remained a spinster because her stars were not propitious for marriage. She is a dubbing artiste. Her job is as thankless and frustrating as her single status.

As expected, the initial conversations between these two unusual characters create negative vibes and are peppered with choice abuses, but a long-distance romance develops because they have a similar interest -- cooking and food.

plot develops naturally as their conversations help to etch their characters. They both get the jitters before their first personal meeting and become conscious of their physical appearances. So, they send younger and better looking substitutes for the meeting in the form of Manu (Asif), Kalidasan's nephew and Meenakshi (Mythili), Maya's roommate. This creates misunderstandings, confusion and conflict which of course is resolved at the end.

The actors have a whale of a time here. The role of Kalidasan suits Lal's restless personality to the hilt and he plays the role very convincingly.

This is a rare occasion for Shwetha to prove that her acting ability matches her appearance and there is no need to show off her assets. She plays a bespectacled woman on the wrong side of 30, so she needs more acting talent than good looks.

The younger actors Asif and Mythili play relatively simpler characters. Asif's exuberance is heart-warming and Mythili redeems herself after her previous dud Kana Kompathu, and gives a good performance.

The surprise package is Baburaj as the roly-poly cook who provides the required humourous touch and does it well.

All in all Aashiq Abu has come out with a movie that will be to the taste of all sections of the audience. 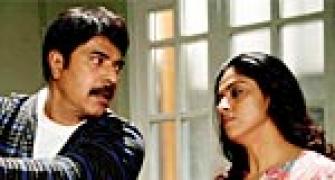 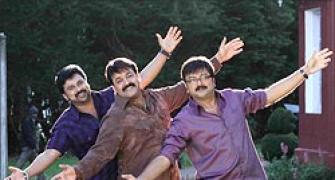 China Town has no substance 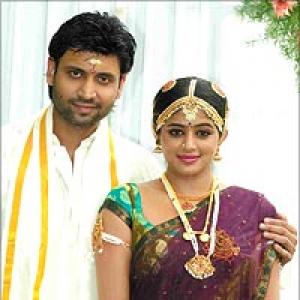