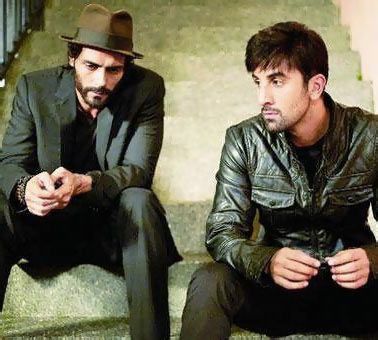 Roy is so tangled in its inflated, erratic ideas of a pseudo mystery that it ceases to make sense even before it takes off, says Sukanya Verma.

I don't know yeh film kaise ban gayi,' wonders Arjun Rampal in one of the most honest moments of the baffling, boring Roy.

That pretty much sums up how I feel after watching this pretentious, problematic, cryptic snooze fest from writer-director Vikramjit Singh.

In the beginning, Roy wears the deception of a psychological drama through its forcibly mysterious characters and their unclear motives.

So there's Kabir (Arjun Rampal), a stylish Bollywood filmmaker exuding the air of swish upbringing but sensibilities of a gratuitous crowd-pleaser. Considering he's at the helm of a mindless, money-spinning franchise called Guns, it's absurd how profound he feigns to be with his swanky typewriter and posh paraphernalia.

What’s funnier is he’s experiencing a writer’s block. Seriously, how bad is this guy if he needs a muse to cook up something as basic as the plot he eventually does in Roy’s movie-within-movie scenario? And so Kabir, a well-known womanizer, finds his inspiration in Ayesha Aamir (Jacqueline Fernandez) while filming his latest project in picturesque Langkawi.

How their bland interactions trigger his creative juices, to write a heist flick no less, is laughable to say the least.

Coming back to Ayesha, she is Bollywood's idea of beauty with brains. Which means she wears glasses (on and off) and has a real job. She's a 'serious' director which, as you know in movies, translates to spectacles for women and beards for guys.

I'd buy her sober, superior status if she were a little less vapid in her actions than the women she dismisses. One minute she's too smart to be philandering Kabir's type, next she's hopping all over Malaysia's streets in a teenybopper's wardrobe to the beats of Punjabi pop like some starry-eyed Betty Cooper.

What sparks a connection between the two is the real mystery. Every single rubbish exchange between them is crammed with words like sawaal, jawaab, kahani and khamoshi.

In Roy's incoherent, vacuous universe of real and make-believe, characters just pop in and out randomly, and out of context.

Also, who knew Malaysia's local radio stations are devoted to the Bollywood grapevine? It's not even bizarre or experimental; it's flat-out stupid.

Anupam Kher as Kabir's father, Rajit Kapur as a detective, Barun Chanda as an art dealer and, above all, Ranbir Kapoor in a role that's best described as misspent, are part of this casualty.

Ranbir, because of whom the theatre was bustling with teenage girls, gazes at everyone with piercing, patronizing eyes that cannot conceal he's too good for this bunkum. After some time, those soulful eyes appear as jaded and exhausted as mine.

The poor guy struggles to appear interested. It's hard to look sensible in a script where the gifted actor is made to ask a lady facing her artwork sporting a brush and colour stains, 'Did you paint that?'

Uneven at all times, Roy is frustratingly aloof and ambiguous for a script that is about getting into the mind of a creatively dry filmmaker. Some scenes imply an OCD personality but conveniently forget that trait, or whatever point it was supposed to make, as the movie progresses.

His co-star Jacqueline is even more one-dimensional. For a so-called independent, artistic, unconventional woman, she's awfully predictable. And all the impeccable styling and flawless ballet on the beach cannot conceal her inability to emote or deliver lines without sounding cosmetic.

Roy is so tangled in its inflated, erratic ideas of a pseudo mystery around parallel lives and loves that it ceases to make sense even before it takes off. Mostly, though, it's just slow torture.