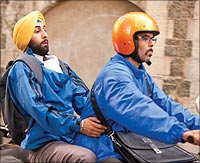 How in the world does Jaideep Sahni do it? Really, how? At a time when our cinema attempts to either be shampoo-commercial glossy or marijuana-rolling edgy, the ace screenwriter hammers out his work with a stark neatness, a stoic tidy that stands out amidst both the varnished and the handheld.

And when we see such unspectacular triumphs as Rocket Singh: Salesman Of The Year, it is clear that mere nails and efficiency aren't what hold them together: like his latest leading man, Sahni sells because he believes.

As said, Shimit Amin's film is an unspectacular one. And it's quite hard to express just how bloody refreshing that is. Comfortable in its own skin, the film never tries too hard, and while it takes a little while to really get going, it completely eschews glitz and bling -- never an easy thing to do, moreso considering the hero's the hottest property in town since a certain Mr Khan moved to Bombay and stammered obsessively -- and does its own thing, nice and easy.

Ranbir Kapoor plays Harpreet Singh Bedi, a lanky Sikh who struggled through his college marksheet and is now ready to sell. Armed with more than his fair share of enthusiasm, the good-natured lad finds himself in a trainee job in a ruthlessly competitive officeful of computer-selling sharks. Harpreet watches, wide eyed, as targets are met and chowkidars are bribed, but the morally staunch boy raised by his grandfather can't quite stomach high-stakes skullduggery, and before he knows it, he trips over his own goofy grin.

The rest is right up Jaideep's alley, a tale of justice a la Jeffrey Archer, a tale that involves entrepreneurship, scruples, profit-sharing and friendship, and the writer-director duo let it unfold gradually, with such warm geniality that Jerry Maguire'd jump at the chance of working in our sincere sardar's Rocket Sales. Predictable to a degree, certainly, but some films are such an easy watch that you consciously avoid second-guessing the filmmakers, you don't want to predict what happens three scenes later.

The boy, as we are all getting used to saying, is excellent. Two films ago, Ranbir Kapoor acted in something where more attention was paid to his tee-shirts than to plot, and yet now he slips so comfortably into the skin of this humdrum Harpreet that it's easy to forget his glamour. He's a versatile, instinctive actor working on roles that are much harder than they look: in this film, he's burdened by the most trite lines in the script, about belief and friendship and ethics, but his earnestness sees him carry them through. This isn't a traditional hero role -- his plans are more than a trifle harebrained and there are no showy moments of grand triumph -- but the way Harpreet keeps plugging away at it makes him more of a role-model than most our postermen. 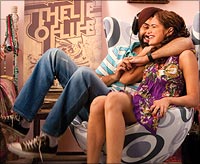 It's also great to see Prem Chopra as Harpreet's patient grandpa. The film's best lines are given to Shazahn Padamsee's Sherena -- right from an abrupt offering of Maggi to a casual 'I love you, use me' flung at Harpreet -- but she's far too vanilla to really work the words, keeping them from hitting the highs they deserve.

Yet this only brings us to another aspect of the film: the romance. Harpreet meets Sherena on work, and then bumps into her at a party, where they drink in the bathroom and he shyly asks her to a movie before he has to get up for some guy who has to throw up in the commode.

Seldom do we see a romantic track handled so casually, but Shimit knows love is completely incidental to Harpreet's story, and even though the director is obsessed with detail -- it isn't a coincidence that this tale of entrepreneurship sees Harpreet nicknamed HP, like a certain computer company formed in a garage, or that he goes to work at a store that is part of the Tata umbrella, a nod to the entrepreneur like no other -- he lets the romance drift in and out of the narrative, treating it with a breezily light hand. Smashing.

The best films about sales are compelling narratives about savage closers, like David Mamet's Glengarry Glen Ross or Oliver Stone's Wall Street, audiences lapping up the con-games used by piranhas in action, but the Rocket Singh story is the exact antithesis of the 'greed is good' dictum: this is about a straightforward, sincere lad who believes in sharing.

And it works, because the film's innate honesty makes us want to believe. That, and the lack of razzle-dazzle. (Heck, the office party sees people drink whiskey in transparent plastic cups with music running on Windows Media Player.)

Rocket Singh might not be everyone's idea of a good time. It's not a film that grips you from the word go, or one that leaves you rolling in the aisles, but it's an impassioned effort that tosses skepticism out the window. Watch it, really.

Rocket Singh won't suddenly break into a jig, and there's something quite priceless about the way he digs into a plateful of noodles after shoving his necktie into his pocket. 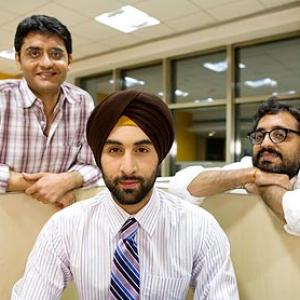 'Rocket Singh will be worth the wait' 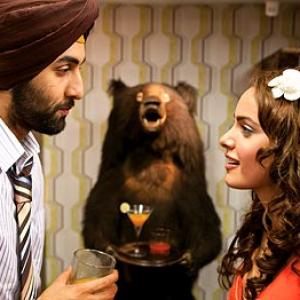 Ranbir: I get nervous before my films' release