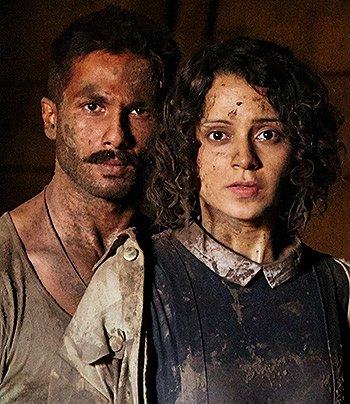 'Rangoon haunts in unlikely fashion and, while the director's most straightforward picture, holds enough of its own marvels to justify multiple viewings,' notes Raja Sen.

She doesn't want to sit on his lap.

Miss Julia is enraged, and all her billionaire boyfriend Russi Billimoria does -- as the man in charge, her lover, her producer -- is slap the inside of his left thigh, inviting his tigress to clamber aboard so he can make it all better.

She seethes while he smugly and knowingly slaps his goddamn thigh.

Julia wants to defy him, but dare not, and she cycles through her fury, before, in her own way, showing as much non-compliance as may be mustered.

She does indeed go to him and allow herself to be patted down and placated, but she perches on his right thigh instead.

Rangoon, Vishal Bhardwaj's new film, is his loudest and largest, a period drama that blasts off with an impressive, immersive war sequence that wouldn't be out of place in something by Christopher Nolan.

It is also, by some degree, his most accessible film, one that leans less on metaphor and symbolism and more directly on plot.

The emotions are overt, the triggers are obvious, the fundamentals spoonfed to the audience more than Bhardwaj usually does, but the world he conjures is stunning.

This is a barnstormer, but one made with superlative craftsmanship.

This is also Bhardwaj's own gleeful riff on what Quentin Tarantino did with Inglourious Basterds -- it is a film where the Indian auteur uses a thicker paintbrush to earn a grander canvas for him to draw out his own wishfully revisionist historical fiction.

That, however, is later. First, as movie posters of the day used to promise, come the 'Thrills! Chills! Spectacle!', and rightfully so.

The year is 1943, and while Indian soldiers fighting under the British flag are being imprisoned by the Japanese army, a young girl known for her stuntwork is making waves as India's most popular cinematic attraction.

Miss Julia is leaps and bounds ahead of the competition, a bright and beguiling cauliflower-haired sensation who swings from chandeliers, runs across tops of trains, and fights off pirates with swashbuckling flair.

With her black eyemask and trim figure, she may as well be called the Lean Ranger.

It is this magnificent sideshow-attraction who swallows her pride (in a way that she probably can swords) for Russi, a one-armed magnate who was once, like her, an action hero doing his own stunts.

He now finances the movies, and is seduced by the idea of an army tour for his staggeringly popular Miss Julia, one where she can go boost army morale and help protect his chummy camaraderie with the British.

The best laid plans, as we know, don't belong in the movies.

This seemingly innocuous idea leads to wartorn bloodshed and revolutionary chaos, even as a boy and a girl fall in love while another boy looks on.

Sides are chosen and betrayed, and many a promise is broken.

The film is shot exceptionally well by Pankaj Kumar, mounted on a grand scale with finesse we in India are not used to, and some of the shots -- like one swirling up the inside of a grand old theatre, or the aerially shot war-sequences -- are glorious.

All this while Bhardwaj treats his film like a libretto, using songs with pointedly prickly Gulzar lyrics to underscore the narrative.

Billimoria is a terrific character, a posturing prince who can't resist the grandiloquent gesture.

Played by Saif Ali Khan, he comes across as an impeccably-heeled dandy intoxicated by his own insistence on his own power.

Early in the film, Julia -- repeating Billimoria's creed that the British are the best bosses for India -- is teased for being Russi's parrot, and, much later, Billimoria declares his love for Julia by saying she is the one within whom his life is imprisoned -- much like a parrot safeguarding an ogre's life in an ancient tale.

This idea of helplessness in love is what drives the love triangle in Rangoon, which sees all concerned parties nonchalantly express their lack of choice and resign all agency in the matter.

This may perhaps be why, even though the film has strong chemistry, the romance is less heady than it is matter of fact: We're supposed to take the characters' word for it.

They are in love because they say they are, and who are they to answer why? The heart -- bloody hell -- wants what it wants.

'Is there anything greater than sacrificing one's life?' the characters ask. 'Yes,' answers the film. 'Yes. That who is worth dying for.'

Living on the brink of death is Nawab Malik, a valiant jamadar in the Indian Army with his focus unwavering from his mission.

Until, that is, Julia enters and mud-wrestles his concentration to the ground.

A righteous man drawn to an impossible lover -- one who can throw knives and tantrums with equal panache -- he is flummoxed by this woman who declares herself untouchable but whom he must hold close.

Shahid Kapoor is perfect as Malik, duty-bound and clipped and proper even when barking orders in Japanese, giving this film a much-needed war footing.

Other cast members worth applauding include Saharsh Shukla as Zulfi, Julia's fiercely loyal make-up man who risks his life to save her bags, and Tony-winning British actor Richard McCabe as the shayari-spouting Brit commander, Harding.

At one point, McCabe practices ghazals on a harmonium and, his mouth meticulously curling around beautiful words he loves so obviously, the scene reminded me of Chhabi Biswas and his singular obsession in Satyajit Ray's Jalsaghar.

This isn't likely to be a coincidence, for few things happen by chance in Bhardwaj movies. This one was originally conceived over a decade ago as an action movie about a Miss Julia -- a Fearless Nadia-esque foreign superstar -- who rode roughshod across Indian imaginations, and was set to star the one and only Uma Thurman.

Now, many years on and in a different version of the film, with another actress having made the part entirely her own, Billimoria still calls Julia 'kiddo' -- which just happens to be Thurman's last name in the Kill Bill films.

Kangana Ranaut is Julia -- jagraati Julia, Julia worth staying nights up for, announce the lyrics as we meet her -- and the actress is extraordinary as she rides and throws and dances with aplomb in what is physically an immensely demanding part.

Ranaut looks like she knows how to actually crack a whip instead of just hurl one around, and acquits herself admirably in old-world stuntwoman sequences, all the while playing the part with enough vulnerability and insecurity to mark Julia out as a confused girl who doesn't quite know what she's doing.

Ranaut is lovely where she teases her friend in the back of a car or where she begs half-heartedly for mercy when pinned down by her lover, and despite so much going on in Rangoon, Bhardwaj and Ranaut make sure the film acts also as a coming-of-age story for Julia.

That said, this isn't the filmmaker at his finest.

The film feels longer than it is, some of the songs interfere with the too-meaty plot, and the romance never feels as soul-stirring as I assume it was intended to.

The climax is a bit of a tightrope walk that culminates in a fair few near-misses, and ends on a rather regrettable misstep.

Yet it is impossible to look away.

Rangoon haunts in unlikely fashion and, while the director's most straightforward picture, holds enough of its own marvels to justify multiple viewings.

Like a song-and-dance troupe trampling all over a map of Europe to tell their own fractured, misguided jokes, or an old man cosily swilling wine after having faked his own death, Rangoon may be direct, but it is never obvious.

As the credits used to say back in the day at the close of a spectacular film, 'Remember, it's a Vishal Bhardwaj creation.'