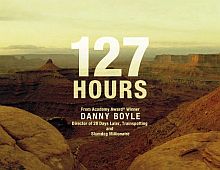 An alarmingly energetic young man, goofy and irrepressible and one who needs to spend his life away from caffeine, guides two pretty girls through a canyon.

Walking through tangerine earth and rock soaked in sun -- the sort of place Indiana Jones would rush through while looting horses from the Nazis -- he tells them about how the place, Utah's Blue John Canyon, was named after Butch Cassidy's cook.

Yet despite invoking memories of cinematic imagery both Western and wild, Danny Boyle's consistently surprising 127 Hours is a very different movie beast: one that stays in one place and barks, howls and licks its own wounds before biting into them.

An adventure isn't supposed to be stationary, you might think, but try telling that to Boyle, the director telling a bleak survival story with such madcap zeal you have no choice but to smile and be seduced -- even as you see a leading man choke on his utter despair.

It is a film that bares its bloody teeth and grins at the end; it's even sneaked a bite out of the viewer.

And while it may feel more rollercoaster than coffin, it is important to realise both situations are as helpless, as confining, and claustrophobic in their own ways.

A mountaineer named Aron Ralston had his arm trapped under a boulder and -- as the film's title proudly declares -- stayed there for over five days, a predicament Boyle imposes on his audience even though he keeps the experience constantly, dizzyingly kinetic.

Playing Ralston is James Franco, the increasingly thrilling actor who is fast emerging as one of the most exciting of his generation. Mere seconds after telling his video camera that he's about to break the guidebook's time by a massive margin, his bicycle flies across the sandscape like a BMX-advert on speed and just when you think he'll fly heroically to the surface, he crashes over a rock.

He laughs, takes a picture of his fallen self, and bounces back to his wheels. This is what he does.

And then, thanks to a stone that stubbornly pins him down, he's thrown out of his element. A man moving constantly and rapidly has the brakes thrust upon him without warning. And he must not just halt, but wait.

It is a wait that leads to the expected, both in terms of feelings -- desperation, longing, retrospection, regret, despair -- as well as cinematic tropes -- flashbacks and flashforwards, conversations with himself -- but Boyle's mastery lies in both pacing and poetic pause, in both minutiae and meteor-chunks.

As you should know going in, this cannot end well. Supporting a gigantic boulder on the right arm for a prolonged period of time is not pleasant and requires an inevitable, perhaps fatal decision. And yet this is a tale of affirmation, of spirit, of self-awareness and of survival.

Franco is a marvel. From the way he fellates a water bottle to coax out a remaining half-drop, to the mock talk-show conversations he has with himself, he delivers a performance heartbeat-accelerating real. Ralston's recollections are standard and relatable, which connect us to him in banal, basic fashion -- but his predicament is horrific.

It is a nightmare he can't wake from, and patience is not his strongsuit. He's a Phish-fan out of water.

Anthony Dod Mantle and Enrique Chediak shoot Franco very close -- the focus is on the crevices of his face, the footholds under his eyelids and shrubby flecks of moustache -- while frequently pulling out and showing us just how insignificant he is to the canyon around him, an insect trapped in a stray, forgotten vein.

As the camera slides past his cheek or lingers on him whittling away at the rock with a cheap, ultimately crucial China-made imitation pen-knife, there is a distinct sense of the tactile. As if we should feel his pain in more ways than one.

Boyle uses splitscreens with tremendous flair -- especially in the film's scorchingly bright opening credits -- and works AR Rahman's score perfectly. A sporadic twang signals the onset of sun, and from there to Franco getting to warm his leg, the music takes charge.

Franco's visions -- highlighted by the recurring sight of a smiling Clemence Poesy, playing a former lover with an exquisite mouth -- are both disjointed and dramatic. And predictability is made up for by sheer energy, from both leading man and his filmmaker.

Leaving behind a limb is much more than an impossible choice, and in the film's much (and justifiably) lauded climax, the sound design is more gruesome even than the visual, the gunshot-thud of snapping bone more devastating than the sight of him tearing into himself, mouth and pen-knife clotting with blood. It is a fiercely disturbing scene, but this is what we mean when we call cinema visceral.

As his lips caress rappling hooks nailed into the rockface, like a sailor touching mouth and foot to dry land after a long spell of impotent waiting, and we feel the relief behind that kiss.

Sting had once talked about how The Police made the catchiest ditties out of their most lyrically depressing songs -- So Lonely, Message In A Bottle, King Of Pain -- and Boyle here crafts a ride so exhilarating we both feel and forget the pain it holds. 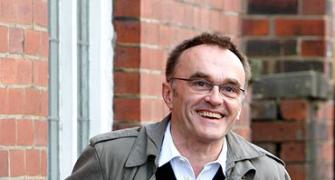 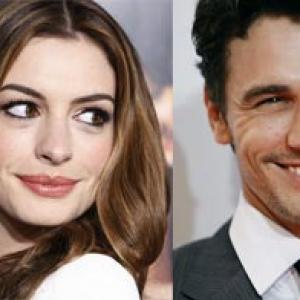 Meet your hosts for Oscar 2011 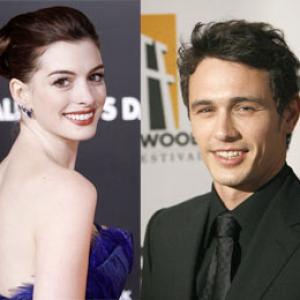 Did the Oscars pick the perfect hosts?