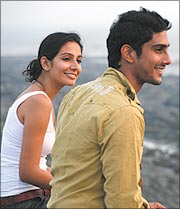 Films about cities, as opposed to films about characters or plot, are soaked in a different kind of romanticism.

Unabashedly smitten by backdrop, filmmakers take us through neighbourhoods, by-lanes and situations familiar to them, in an attempt to let the city woo us as it has clearly done them. Dhobi Ghat is a film utterly besotted by Bombay -- which is why it jars when it doesn't call it that.

There are four protagonists, each starkly different from the other. It all varies diametrically: background, career, social standing, and most critically, their level of acquaintance with the city, their relationship with Bombay.

And yet, most likely to skirt clear of inane controversy, they constantly call it Mumbai. We don't. As a migrant increasingly in love with this city, I declare that commitment to the safer word untrue, a false note that tragically trips up a film trying so hard.

And that is what Kiran Rao's directorial debut eventually is, a film that tries too hard. And visibly so. Falling prey to all the arthouse cliches -- handheld cameras, romanticised obsession with rain, multiple narratives, conversations focussing on class disparity, exclusively 'creative' lead characters -- the film comes across as earnest but hollow.

Handicapped by the self-consciousness of a student film, it feels like a diploma project, albeit one with excellent production values and solid performers. Rao occasionally conjures up lovely moments, moments that feel wonderfully accidental and incidental, but those that fleet by too quickly. It is a clearly affectionate debut, but falls short of being an impressive one.

It is a film with soul, but not nearly enough story. The plot -- that of an artist stumbling upon a story as characters around him fall into one-sided love -- just doesn't have enough meat to warrant a feature.

Dhobi Ghat would have worked wonderfully as a short, actually, at most a 40-minute ode to the city. I strong believe films have a right to forsake story, sometimes even entirely, but then they must seduce interest through mood, texture, and emotion -- the telling can overwhelm the need for the tale. If skimpy with the meat, give us gravy worth killing for. And while Rao is dedicated to mood and languor, her film just doesn't engage enough to justify its length.

The parts are better than the whole, really. Gustavo Santaolalla's score is beautiful, for example, the title theme positively haunting.

And Prateik is a treat. Fantastic from the get-go, the thrilling young actor has a warm, immediately likable screen presence and provides the film's most honest moments. His body language -- slackery and loose, like a wornout rubberband, occasionally snapping into speed -- allows him to inhabit the dhobi's skin, and there are scenes he positively shines in.

Aamir Khan, in my mind looking better than ever, leaves his innate Aamirity aside and truly becomes the film's Arun, a reflective, self-involved artist shaken out of his stupor by a revealing story. He's a great character -- one distanced from his own grief but easily and voyeuristically feeding upon a stranger's tragedy -- and Khan forsakes charisma for credibility.

There comes a time he gets scared -- I refuse to reveal what of -- and Aamir's freakout is perfect and pure, a goosepimply moment of acting transcendence. However, he's only good when he isn't talking. It's an absolute shock, but Khan seems ill-equipped to handle English dialogue, his delivery stagey, inconsistent and mostly artificial. He's a fine actor delivering one of his best, most understated, most honest performances, but his lines don't work at all. Yet Rao mercifully gives him more beats than words, and those he knocks clear out of the park. 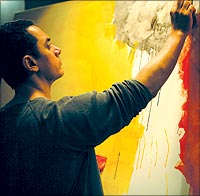 As a camera-happy banker enamoured by the city's sleaze, Monica Dogra is very, very believable. It's a solid performance but her accent, however authentic, ironically gets on the nerves. It suits the character to a T, and yet cinematically it lets her character down, which is a shame because it's so well-written.

Kriti Malhotra has the opposite problem. Playing a smalltown girl writing a video letter to her brother, she's both authentic and visibly talented, but her character is one-note, the only flat one of the four.

So fits and starts, then. There is some fine writing on display, and mostly steady performances, but usually independent of each other.

For a paean to an often-caressed city, it has nothing new to say or show, save a brief glimpse of the rat-killing profession. And then there's its stubborn conventionality: Prateik and Dogra's arc, for example, cries out for sex, but it is denied; Babbar instead is straddled with a strange gangster tragedy that seems shoehorned into the film merely out of a need to wrap up a Bombay-cliche checklist.

Dhobi Ghat is a middling debut, watchable due to its nuances but simply not interesting enough to recommend. Yet Rao seems assured of her craft, and worth looking out for in the future.

Indeed, she deserves applause just for giving Prateik the platform she has, highlighting a raw young actor the industry ought covet. She clearly cares for her characters and has a massive crush on Bombay, her leading lady. Yet her lovesong, however earnest, just doesn't sound good enough.