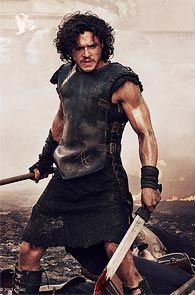 Pompeii is one of those rare films for which I am glad that a 3D format was used. If cheesy, overdone, masala flicks are your kind of fare, this is your kind of film. For the rest of us, Pompeii just blows, rants Paloma Sharma.

The volcano gods are certainly angry, and Peter Anderson has chosen you to be the virgin sacrifice.

However, before you are dropped down the fiery hole of Mount Vesuvius, Anderson and his four writers of doom -- Janet Scott Batchler, Lee Batchler, Michael Robert Johnson and Julian Fellowes -- have prepared you a last visual supper; and as the saying goes, there's nothing like a free lunch.

Pompeii generously borrows elements (and storyline and character arcs and production design) from Gladiator, Troy, Titanic and The Princess Bride --  but without the brilliant execution of any of its influences.

Speaking of influences, this one should be kept away from children. Scenes of graphic, almost mindless violence litter the celluloid -- and I use litter as an understatement.

The film opens with the massacre of the Celts, a tribe of horsemen, by the corrupt Roman future-senator Corvus (Kiefer Sutherland). A lone child survives by pretending to be dead after witnessing the brutal murders of his parents as well as the rest of his people.

The child grows into a six pack sporting, perfect-nosed slave who is captured by Romans and becomes a gladiator (although he could have been a hair shampoo model just as easily). Our pretty boy, who goes only by the name of the Celt (Kit Harington), manages to impress the equally pretty Cassia, the daughter of Pompeii's richest man, by breaking a horse's neck in front of her.

However, all is not well with the two lovers. Just like a run-of-the-mill Nocholas Sparks novel, The Shiny White People cannot be together because they belong to different classes. Also, um, just another minor detail -- Corvus is completely smitten by Cassia and will stop at nothing to 'obtain' her.

Could they get any more original than this?

The Celt, who later reveals that his name is Milo (ah ha ha ha ha... yeah, no really), is sold off to a gladiator house in Pompeii where he must fight Atticus (Adewale Akinnuoye - Agbaje), the reining champion, who is one fight away from winning his freedom. Total bromance ensues between the two men who will face each other to the death less than 24 hours later because that's just what gladiators do.

seems bored and, if I were to take the liberty of observing, slightly constipated as he struggles with both dialogue and action sequences. However he makes for a brilliant prop, lurking in the background. The Keanu Reeves we saw in 47 Ronin would have been such a better choice for this.

Adewale Akinnuoye - Agbaje outshines the leads because even a hundred watt light bulb could accomplish that while Carrie-Anne Moss is given two whole dialogues and three minutes of screen time as Cassia's mother Aurelia. She's the only believable character in the film, largely due to the actress who portrays her.

Despite all its shortcomings, Pompeii is a geologist' delight. Mount Vesuvius rumbles and grumbles, oozing lava and raining fiery fury down from the high heavens on to the good citizens of Pompeii. The abiding are spared, the sinners blown to smithereens.

Here's how the script was probably written:

Cassia and Milo fall in love.

Oh, wait. Where is this story going?

This is getting repetitive.

Nevertheless,  all is not lost.

VFX supervisor Dennis Berdardi and DP Glen MacPherson managed to squeeze a tragedy in a 20 minute extravaganza complete with earthquakes, lava, airborne fireballs and even a stunningly beautiful tsunami sequence.

The dance of the destruction that the elements perform with Pompeii as their stage, in which man and monument alike fall down like dominoes in the wind is breathtaking.

The rest of the reels with the love and the revenge and all the other silly, badly acted out emotions only spoil this aesthetically awesome Armageddon.

The director would have fared much better if only he'd played the fall of Pompeii out to a more soothing soundtrack instead of songs by Spartacus.

Pompeii is one of those rare films for which I am glad that a 3D format was used. If cheesy, overdone, masala flicks are your kind of fare, this is your kind of film. For the rest of us, Pompeii just blows.