Review: Nothing should keep you from watching 2 States 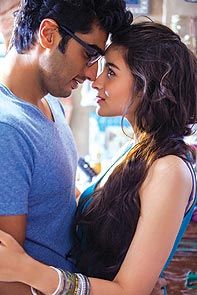 The one sure thing that is common between North Indians and South Indians is that they crack jokes at the expense of the community that resides far on the other side of the country. Abhishek Verma's 2 States does the same, except that it has no qualms admitting to the same.

2 States takes the North-South divide extremely seriously and since, according to the film, South Indians are from Venus and North Indians are from Planet Red Bull, I should probably disclose here that my loyalties lie on the Northern side since perspectives are bound to differ based on culture and geography.

The film opens with Krish Malhotra (Arjun Kapoor) settled on the sofa of a psychiatrist's office as he narrates the story of his life. What follows is the usual boy-meets-girl story.

It's a well known fact that in India, you don't just marry the boy/girl, you marry their entire family. 2 States chronicles Ananya Swaminathan and Krish Malhotra's trials as they try to make their parents see that their love for each other is above the petty lines of region and language, but their effort of bringing their families together threatens to tear them apart.

2 States has more than its fair share of Madrasi-Punjabi jokes. If it were a Bond film it would probably be called Stereotypes Galore. It is a little annoying how, throughout the beginning of the film, Krish uses his Punjabi-ness as an excuse for everything.

Krish's idea of courtship is, as Superwoman aka Lilly Singh pointed out, "I, man. You, woman. So…" Krish freaks out when he sees Ananya wearing shorts and behaves quite immaturely until he finally confesses his feelings.

In the beginning the relationship is all biology (which really makes it annoying to watch), but something about spending time with Ananya sees Krish growing up. Ananya, for her part, seems to be completely sorted with hardly any internal conflicts and very little back story. However, it is a relief that the film does not see her losing herself and being someone she's not just because love and marriage have come into the equation.

You see Krish's character evolve from childish and afraid to grown up and confident, and though the journey is sweet, it is a tad long at two-and-a-half hours.

Since I am privy to the information that 2 States is based on Chetan Bhagat's semi-autobiographical, eponymous novel, I cannot stop imagining his head on Arjun Kapoor's body for the initial moments in their courtship. But Kapoor grabs the reins the moment Ronit Roy, who plays his father, enters the scene and the full force of the turbulent relationship between father and son hits you.

Scenes between Roy and Kapoor are intense and almost alive. The circle of alcohol, abuse and anger, and its devastating effects on a family are portrayed delicately. Nothing is too graphic but the understanding of what you are compelled to read between the lines is more powerful than any amount of dramatic shows being put up. Verma handles abuse with the proper sensitivity, which is a rarity for Bollywood.

On the other hand, Ananya's relationship with her family, her conflicts with her mother and her closeness to her father, her parents' marriage, her mother's musical troubles and her father's dislike for Chennai remain unexplained. The Swaminathan's sudden warming up to Krish seems unlikely if they are as conservative as the film claims they are. This makes the family drama seem a little one-sided.

Amrita Singh plays the typical Punjabi mother to the T and the clash of cultures makes for a highly amusing watch. As someone who has not read the novel, the narration, though humorous, feels a little inconsistent. Though I cannot put a finger on it, I feel like I'm missing out on something that's supposed to provide the link between one scene and the next.

The romance is a slightly unbelievable. It flows a little too smoothly and often gets wrapped up by showcasing a montage of lovey-dovey clips played to a song. Krish seems to have superhuman strength as he starts his day at 6 am by providing IIT coaching to Ananya's younger brother, Manju, moves on to work and ends it by romancing his lady without as much as developing dark circles or exhibiting signs of tiredness.

The song-and-dance sequence at Krish's cousin's wedding undermines the seriousness of the culture clash but provides a good enough opportunity for 2 States to take a strong, unapologetic and rather hilarious stand on dowry -- something that we North Indians have normalised a little too much.

Although Aliaa Bhatt seems more Kareena Kapoor Jr in the initial stages in the film, she really grows into the character and makes you believe that she's a career-oriented IIM-A grad. Arjun Kapoor for his part is Krish. You don't see the guy from Gunday. You only see Krish Malhotra. Although, given his character's inclinations, one would think that he's button up his shirt.

2 States might be a romance but it takes romanticism too far. In the age of computers, Krish sets out to write his novel on a typewriter out of a broken heart. Moulin Rouge, much?

The film is really cheesy but I won't hold that against it. Stereotypes are never lacking and even though, as a North Indian, I understand what the film is trying to say about different points of view of looking at the same thing, I also find the extent that they take it to a little offensive.

I find it a little hard to believe that in today's world Tamilians and Punjabis hold such views about each other. This is not to say that it is untrue but that it is difficult to digest for someone from a metro who has had friends from all communities throughout their life.

2 States' romantic angle is a little difficult to connect given the way it is moved along in such a hurry in order to incorporate everything, but the family side of the bargain is truly touching. I ended up crying at least thrice in the film. The father-son relationship is bound to bring tears to one's eyes. Redemption is closer than it seemed before. But the end is a little too convenient. Forgiveness does not just come automatically, just because you want it to, after enduring screams, broken glasses and empty chairs.

Nevertheless, there's nothing that should keep you from watching 2 States. If you're as desi as I am and get senti about maa, there's no way you won't run home after watching this film and give your mother a big hug.