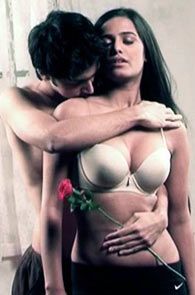 Poonam Pandey’s fans have seen enough of her on the sundry social networking sites and there is nothing new that she offers as Nasha's lead character. She excels as a seductress.

Remember your days in school and college. Remember how you fell for the charms of your teacher.

Remember how ‘innocently’ you imagined making love to her. And remember those heartaches.

That is Sahil’s story. It takes you back to your growing up days.

Four teenage boys in their hostel’s swimming pool jump stark naked -- the right places are blurred out, mind you, but hats off to director Amit Saxena to show such a scene in a mainstream Hindi cinema without making you feel uncomfortable -- into the water as their girlfriends come strolling in and watch them in the buff.

The boys have lost a challenge have to do the dare.

Sahil's girlfriend Tia (Sheetal Singh) is the only one in the entire cast that shows no signs of being camera-shy.

The peppy dialogues (by Radhika Anand) keep you entertained and even provoked through the film. Of course, these dialogues are meant for the film's target audience, the teenagers, not for grown-ups.

The film has its share of abusive language but there are also moments of tenderness, love and heartbreak captured brilliantly.

Another department where Nasha scores big time is the film’s music by Sangeet-Siddharth. The Goti number is likely to become a big hit with urban teenagers, as it perfectly captures their lingo.

Where the film lets you down (and no pun intended here) big time is when Sahil and Anita (Poonam Pandey) make love to each other. Saxena fails miserably to get the right expressions from Nasha’s lead stars when they are in the throes of passion.

This parting shot from Sahil's muse is enough to help him come out of his Nasha, enjoy the hangover and carry on with life.