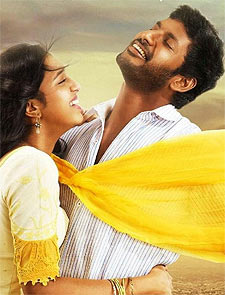 Director Thiru and actor Vishal come together for the third time after Theeradha Vilaiyattu Pillai and Samar.

Naan Sigappu Manithan has an ingenious plot centred on an individual suffering from a neurological sleep disorder, medically termed narcolepsy.

A person suffering from this disorder is unable to control his subconscious need for sleep. Any sudden or loud noise, extreme emotions like anger, joy or love, causes him to abruptly collapse into a deep state of sleep.

Indran (Vishal) is diagnosed with this disorder as a child. Saranya Ponvannan, who plays his mom, is extremely supportive and is assisted by two of his friends, Sunder Ramu and Jagan.

Indran grows up to be totally dependent on them and is unable to travel anywhere without their help and support.

Saranya desperately wants to get her son married. But it is not possible for Indran to have an intimate relationship because these powerful emotions will invariably trigger his sleeping disorder.

Indran is resigned to his fate. Then Meera (Lakshmi Menon) comes into his life and gives it a new meaning.

She is the daughter of a rich business tycoon, Jayaprakash. He is against the match, as he fears that his daughter will not be able to bear children if she marries Indran.

But Meera is determined to find a way. Together they discover that in the shower or under water, Indran never falls asleep despite all provocation.

This leads to the two of them experimenting in a swimming pool, where they eventually get intimate and Meera gets pregnant.

Just when the ecstatic couple believes that all their problems are solved, fate delivers a cruel blow. The first half ends with Meera being brutally gang raped, with Indran lying helplessly asleep.

How Indran, who has absolutely no clue to the identity of these men, finds them and avenges his beloved, who is lying in a coma, forms the rest of the story.

Music by G V Prakash and cinematography by Richard M Nathan are excellent, creating the right ambience and intensifying the emotions of the characters.

The first half of the film is extremely engaging with a good mix of drama and humour.  Jagan keeps the audience in splits with his witty one-liners.

The story, however, takes a different turn in the second half, deviating from its central theme and characters.

Lakshmi is then sidelined in favour of Iniya, who makes a surprise and brief entry, but plays her part well.

Vishal has given an admirable performance, totally understated and in keeping with his character. His frequent collapsing appears absolutely natural with no superfluous theatrics.

Lakshmi Menon too fits her part perfectly and so does Saranya Ponvannan as the quintessential adorable mother.

However, it is director Thiru’s intelligent screenplay that keeps the audience totally engrossed till the very end.

The subject has been well researched and interpreted without being overly sensational or melodramatic.

The second half, however, does meander quite a bit before getting back on track.

Naan Sigappu Manithan is a riveting revenge drama with an honest narrative, excellent performances and many entertaining twists and turns. 'We should not spoil the goodwill a Rajni film title has' First Look: Dileep and Joshiy team up in Avatharam 'Naan Sigappu Manithan will be a new experience for the audience' 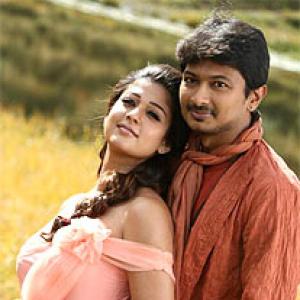