Spyder is a classic tale of good versus evil that works on the strength of its dynamic hero and intimidating villain, says Sukanya Verma. 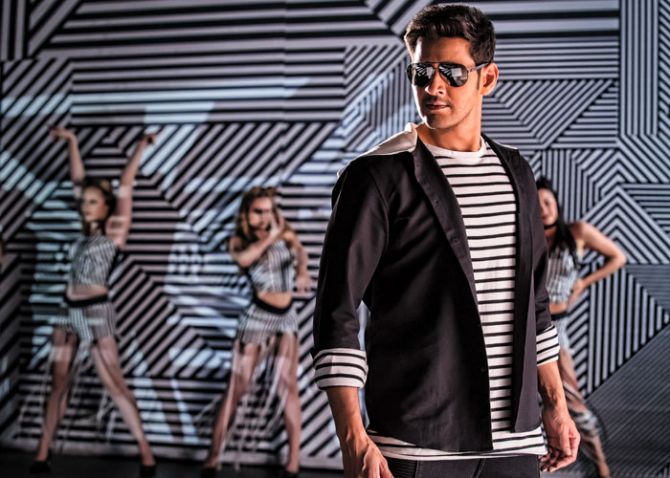 1. Some stories never get old if told well.

2. Pace and audacity are the bedrocks of masala genre.

Director A R Murugadoss finds the sweet spot between the two in his comic book treatment of good versus evil wherein a tech-savvy superhero takes on a ghoulishly grinning whacko.

Every bit of Spyder's screenplay is an unabashed excuse to play off these yin and yang forces, minus the dazzling philosophy of conflict abounding in The Dark Knight.

Christopher Nolan’s contemporary classic is an obvious reference point in Spyder -- be it to serve up a chilling face of villainy or justify its hero Shiva’s prying modus operandi under the pretext of public security, almost like an Indianised episode of Black Mirror set in an Aadhar-equipped dystopian future.

It’s good thing then the cucumber cool Mahesh Babu plays Shiva. And not only because of how swish he looks in the funkiest of costumes or spa-fresh whilst recuperating on a hospital bed.

There’s an effortless invincibility and integrity about the Telugu superstar that beguiles us to buy into Shiva’s questionable tactics or accept his authority when he forms an on-the-spot rescue team of middle-aged housewives, instructing them to clamber their way into the house sheltering a murderous antagonist, in Spyder’s most madcap, most delightful sequence.

In the Telugu version I watched, the subtitles awkwardly translate Shiva’s might as 'Marvel comics would’ve come into being after seeing him. No doubt this guy is a graduate from Hogwarts.' But it’s only when our man, moments away from passing out on an ambulance stretcher, aims a perfect shot into his offender that I was truly convinced about Spyder’s clunky aggrandizement.

As the selfless, straight shooter slogging it out at an intelligence bureau, that seems more fantasy than real, for a measly remuneration, Shiva’s superpower relies on high-speed internet powered computers that tap calls and trace culprits even before they’ve committed a crime in the tradition of Minority Report. Except it’s his handy human ammo of at-your-doorstep services that often saves the day and steals the show.

A murky backstory at the cemetery recalls his genesis as a killer kid triggered by a morbid fascination for the bereaved and their tears.

In the middle of its ‘unstoppable force meets immovable object’ fervour, Murugadoss squeezes in romance-cum-comic relief in the form of Rakul Preet Singh’s bubbly archetype whose ‘friends with benefits’ claim doesn’t extend beyond verbal commitment and a routine song-and-dance presence.

Dialogues like 'You know I am a medical student, right?' act as an embarrassing reminder of no one taking her seriously.

Shot with more kineticism than gloss by Santosh Sivan, Spyder’s masala-filled mayhem takes great pride in showing off its scale across VFX-aided rollercoasters duels, rolling giant boulders and buildings collapsing into rubble that leads to a big-scale, bloated climax. But it’s the classic face-offs on who-has-the-last-word and in the idiosyncratic display of imagination that Spyder gains ground.