Review: Madras is a must watch! 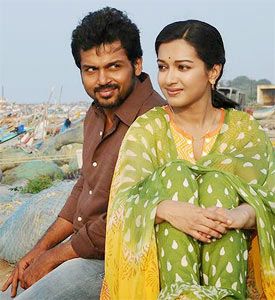 Director Pa Ranjith’s Madras is an intense emotional drama that gives you a ringside view of the lives of the underprivileged in North Chennai, says S Saraswathi.

Director Pa Ranjith is back with a bang. His directorial debut Attakathi, a romantic comedy, was a huge hit.  And now, two years later, he returns with Madras, featuring Karthi and Catherine Tresa in the lead.

The film takes us into the homes of the underprivileged in North Chennai, presenting a ringside view of their lives, their relationships, their emotions and their unbreakable bond with the murky world of politics.

The plot is exceedingly simple, quite ridiculous even.  It is only the director’s ingenuity that has created such an exceptional tale from something as mundane as an old building wall.

Two warring factions of a political party are desperately trying to establish their supremacy by taking control of an insignificant building wall at a housing board apartment complex.

The wall previously displayed the picture of the two powerful leaders together, but with their split, there is a huge tussle as to who owns the wall.

Political egos are at stake, violence erupts and innocent lives of residents are lost. The battle continues into the next generation and there appears to be no end to this madness.

Kaali (Karthi), an IT professional from this neighborhood, is dragged into this mess when his childhood buddy, Anbu (Kalaiarasan) becomes involved with one of the parties.

Anbu wants to put an end to the senseless deaths, but matters come to a head when an angry, short-tempered Kaali kills the son of one of the party leaders.

Things get even more complicated.

The depth and intensity of every relationship is well portrayed. The beautiful friendship lends credibility to the storyline. Kaali’s family, especially the mother and grandmother, are totally hilarious. There is the charming relationship of Anbu and his wife, Mary, played admirably by Ritwika.

The first half races along, keeping one enthralled. The pace slows down a little in the second half.

The film’s biggest strength is the total lack of exaggerated cinematic moments.

The director has used small, everyday events to make his point - pumping water at the common pipe at five o’clock in the morning, soccer games that continue into the night and an overprotective mother on the hunt for the perfect bride for her only son.

The underlying humour is cleverly maintained through all the emotion and drama.

There are no commercial compromises in the film; the characters remain true to their identity throughout.

The romance between Karthi and Catherine Tresa is interesting; there is no love at first sight here, nor the predictable opposition from parents.

This is one of Karthi’s best performances after Paruthiveeran.

He is well supported by the entire cast, who seem very comfortable with their surroundings, perfectly mimicking the unmistakable accent, slang and body language.

Santhosh Narayanan as usual is excellent. His background music score and songs provide the right ambience for the film.  Cinematographer Murali and editor Praveen too deserve credit.

The innovative script, well-etched characters and the commendable performances, strengthened by a brilliant technical team and perfect execution, make Madras one of the best films this year.