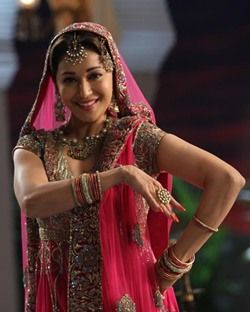 Because, you see, this winsome widow wants to be charmed by couplets, swept away by sentences, ribbed by rhyme. And thus we have a swayamvara where instead of bows and arrows -- as her sassy handmaiden explains -- a line must

be tossed into the air and a challenger must shoot it down with a lyric. The one and only Madhuri Dixit is the suitably unattainable lady in question, with Huma Qureshi as her first mate, so to speak.