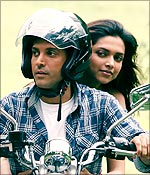 The idea of a mystical assistance to succeed through life's inevitable disappointments is quite a fascinating one. Genie in the lamp, Fairy Godmothers or any wish-granting medium is an upshot of this peculiar human fantasy.

Karthik Calling Karthik, too, stems from this deep-rooted desire.

Only our eponymous hero (Farhan Akhtar) isn't Aladdin, Cinderella or Bruce Nolan (of Almighty fame). A stereotypical weak geek at the receiving end of his scowling landlord (Vipin Sharma doing what he does best -- snap) and growling boss (Ram Kapoor with his snarling skills should sign up for Wolf Man), he's pretty much invisible for everyone else in the world, including, the leggy colleague in a pencil skirt (Deepika Padukone) to whom he's written a thousand plus unsent drafts of affection. Basically, he is Amol Palekar of Chhoti Si Baat, sans the goofy smile and mysterious past.

Dude seems to be in desperate need of Cinkara (Hamdard ka tonic, anyone?). But this is Farhan's production. And he's all about indelible charisma, hip aesthetics and urban wit. While the easygoing charm and wall decor is spot on, absence of crisp humour is conspicuously felt all through its loitering 16 reels.

Having said that, it's imperative to remember this is a Vijay Lalwani film. The first-time director is the strength or weakness behind its story, screenplay, dialogue and direction. If you view this with the expectations of a Farhan caper, you're doing both of them great disservice.

In other words, herbal tonic is out of question. Instead Karthik starts receiving strange calls from another Karthik who promises to help him attain everything that is rightly his -- power, money and love.

Desperate for comfort, Karthik doesn't need too much convincing before he takes up the seemingly unconditional offer. In no time, he's promoted from cabin to cubicle and single to boyfriend status.

No personality makeover in Hindi films is complete without a change of wardrobe. Even Sai Paranjape couldn't resist doing this to Farooq Shaikh in Chashme Buddoor. And so it's bye-bye Surinder Sahni and say-hello-to-Dil-Chahta-Hai.

Quickly enough, Lalwani runs out of ideas and till intermission KCK seems to be heading nowhere. Pace (editing by Aarti Bajaj) is one of the film's recurring problems. It's unnecessarily pensive and long-winded for its genre.

Even the romantic interactions are sluggish and uninspired. Although Farhan and Deepika are a cool couple to look at, you don't feel the vibe, mainly, because the conversations are just so 'meh'.

Their chemistry fares better against the breezy Shankar-Ehsaan-Loy composition, Hey Ya, choreographed effectively around their courtship and dating in office, malls, coffee shops and Khandala.

Things get dark and creepy in the second half when the Karthik-Karthik pact takes a beating. This is when Lalwani comes in his element and shows a flair for gritty thrillers without resorting to cheesy exaggeration or relying on excessive technique (camerawork: Sanu John Varughese, background score: Midival Punditz and Karsh Kale).

At this point, the on-going events on screen lead me to construct a sort of Dr Faustus meets The Dark Half brand of murkiness. If only Lalwani was as ambitious as the sinister alternatives in my head. 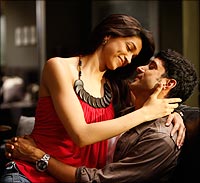 He, to my disappointment, opts for a rather squishy third act as opposed to the threatening climax I had anticipated. While Lalwani deserves a pat for working around an unusual, intriguing plot, he fails to sustain the same with substantial meat or layers.

Also, why does he hint out the suspense so early in the film? It's a crazy move and ruins any hope of the obligatory 'Whoa, I didn't see that coming.'

What is remarkable, however, is to witness is Farhan's evolution as an actor. Despite being a fairly visible face in the media, there's something unpredictable about his aura. And so far he's worked it to his advantage -- never letting the audience know what else he is capable of till he actually does.

Unlike Luck By Chance or Rock On!!, which saw him play self-assured characters, he is surprisingly believable as a fraught loser as well. He conveys the anxiety, simplicity and frailty of Karthik even when the script isn't doing it for him. Perhaps it's his innate filmmaker instinct.

Clearly, Deepika Padukone doesn't have it. And while she looks every bit of the unattainable dream Karthik envisions her to be, she doesn't hold a single scene on her own. Whether she's cautiously lighting a cigarette, robotically slapping the office jerk in Del Italia or scoffing at Karthik's confessions, all you really see is, well, nothing.

Films like Karthik Calling Karthik are all about winding up right. This one fails to make a connect. Pity, it could have been that all important call you've always been waiting for. 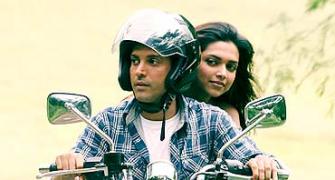 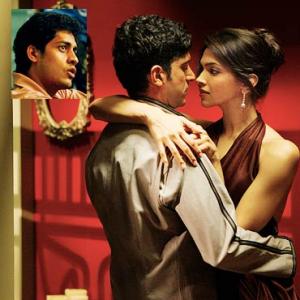