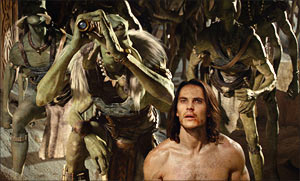 Shaikh Ayaz feels that John Carter does lose its track but has enough twists and turns to keep the audience engrossed.

Why are movies so much about destruction these days? Annihilation of cities, alien invasions and bestial threats have become commonplace in Hollywood's line-up over the years. It's aimed at young audiences, of course, who seek in their cinema more than just human experience.

Andrew Stanton's John Carter is an addition to that growing list, but unlike most films of this genre, it is entertaining, vibrantly shot, and with enough twists and turns in the plot to elevate it to more than just a sword-and-sandal adventure.

And why not, as it is based on the work of Edgar Rice Burroughs, best known for dazzling generations of readers for close to a century, with his Tarzan sagas. John Carter may not be in the same league as Tarzan, but he is no pushover.

Most of the film unfolds in Martian territory. A veteran of the American Civil War, John Carter (Taylor Kitsch) is plucked out of his current existence and transported to a warring Barsoom aka Mars, where we see him becoming a full-fledged warrior.

Things are rather bleak when he arrives. First, he is captured by the monstrous, four-armed, green-coloured Tharks, and then falls from the frying pan right into fire when he gets sucked into the war between the cities of Helium and Zodanga. In a throwback to Avatar, he falls in love with Dejah Thoris (Lynn Collins) and fights with her faction to save their planet.

There is some complexity and depth to the narrative, which saves it from being the usual humans-fighting-off-aliens or lone-ranger-rescuing-the-planet fare. At times, there is so much happening that you lose track of just what is happening.Yet, John Carter serves its purpose of having you chained tightly to your seat and somewhere, after you are done with the film, you are predisposed to view it as a tacit announcement, or rather an apparent promise of many more instalments marked out for the future.