Nothing new in Jawan of Vellimala 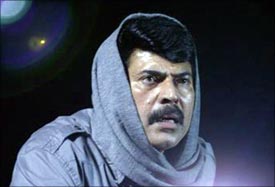 I see dead people" -- the famous line from Manoj Night Shyamalan's Sixth Sense (1999) may have been the seed from which sprouted Jawan of Vellimala, the Mammootty starrer directed by newbie Anoop Kannan.

Writer James Albert has created the story around the character of Mammootty, who sees dead people. Everything else is incidental.

Gopikrishnan (Mammootty) is a security guard at the Vellimala dam. He claims to be a Kargil war veteran who had to leave the army as he was injured and almost lost his eyesight.

Gopi is the butt of ridicule around Vellimala because he is petrified of doing night duty; he claims to see the ghosts of people who have committed suicide at the dam. People think that Gopi's Kargil stories are just a pack of lies or the product of an overheated imagination.

It is good see the megastar vulnerable, insecure and scared for a change. Gopi's moral courage to question the corrupt panchayat president is presumed to be a facade to hide his cowardice.

Except for the character sketch of Gopi, there is nothing unusual in the film. We get to see the familiar rural surroundings peopled by typical characters and situations that are not fresh to put it mildly.

There is a buried love story between Gopi and Anitha (Mamta Mohandas), the camp officer, whose prime motive is the welfare of the employees.

Varghese (Sreenivasan) is the incorruptible executive engineer with a stock of self-deprecatory humour. Baburaj, who has been entertaining us as a comedian for a while now seems to have emptied his bag of gags and tries to amuse us with his funny dancing skills as chief engineer Chako.

By the end of the first half, we get the idea that something is simmering below the surface; people are warned of imminent danger of landslides in the area that will lead to a deluge.

The dam is abandoned and people who worked for it and take pride in the dam are dejected, along with Gopi whose father had laid down his life for the construction of the dam.

So Gopi embarks on a fact-finding mission with the help of young Asif Ali, whose father was a contractor for the dam.

They discover that everyone from the home minister of the state to the local goons is involved in a conspiracy to shut down the dam.

In true comic book style, the hero regains his superpowers and conquers his fear of ghosts after a pep talk by an ophthalmologist (played by director Ranjith in a cameo that lasts a few minutes).

We cannot ignore the echoes of the Mullaperiyar dam controversy in the background; here, unfortunately, the conspiracy theory feels a bit too stretched.

At the end, Jawan of Vellimala, which held so much promise in the beginning, just fizzles out. Prithviraj takes on Mammootty this weekend 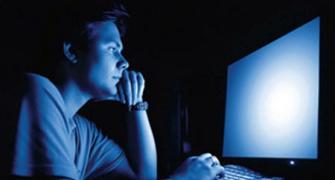 Suresh Gopi and Mammootty team up together