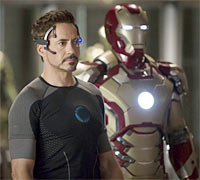 It’s easy to forget just how much that suit weighs.

And that’s because it looks so, so good. Aerodynamically magical and ergonomically perfect, the suit is a technological marvel in red-and-yellow -- it’s as if Jony Ive worked for Ferrari. Everyone’s favourite sequence in the last Iron Man film, in fact, featured the suit extending itself -- going from a briefcase to sheathing all of Tony Stark’s body in a matter of very sleek seconds.

In the latest film the suit goes even further, peeling on and off bodies in motion, mid-air and even clamping itself on piecemeal. It’s a jawdropper all right.

And yet it is only in Shane Black’s Iron Man 3 that we actually get a sense of the suit’s perceptible weight; of how goddamned heavy it must be as it protectively rearranges itself around Gwyneth Paltrow’s body during an explosion -- and how helpless she looks, pirouetting as the suit yanks itself off her and goes to find its master.

Her neck twirls like a twig as the suffocatingly secure red and yellow leaves her, safe but decidedly with her brains puréed. Tony now has more suits than a man could need (even Barney Stinson will agree) but this is a film where we see him also as a fallen knight, dragging his armour through the snow. The message is clear: his armour is also his prison.

All messages, in fact, are clear as a plexiglass visor. In a world after the last Marvel megamovie, “subtlety,” as a character in this movie says, “has kinda had its day.” It’s true.

Tony Stark might be playing with suits, but there’s a cartoonishly fearsome fundamentalist loon on the horizon called The Mandarin, and he’s sending parable-filled messages and revelling in making America crumble like a fortune cookie.

Meanwhile, Stark himself is suffering from anxiety attacks. Following the climax of last year’s blockbuster which saw him almost dying before he suggested everyone try shawarma, Tony’s apparently shaken up.

“Nothing’s the same since New York,” he broods 911istically about what might have been. Best friend Colonel James Rhodes is less impressed, complaining about how Stark is frequently “off with the superfriends.” Yup, it’s a movie where sincerity is met with a wisecrack, a movie where snappy lines cut each other up like swordsmen on steroids, a movie that builds its energy from its banter. (The arc-reactor inside Shane Black must be a VHS tape of The Odd Couple.)

Rhodes has reason to be upset. His old-school grey War Machine suit has been painted red, white and blue, and he’s been rebranded Iron Patriot. This sets the stage for some delicious Riggs-and-Murtaugh style repartee between him and Stark, no surprise coming from Black who wrote the Lethal Weapon movies.

Iron Man 3, then, is a film about Tony talking to people: To Rhodes, to an impressionable young kid, and to his girlfriend Pepper. And when someone like Black’s writing words for Robert Downey Jr to say, we’re in business. Kiss Kiss, Clang Clang.

Yet what glorious clanging it is. Iron Man 3 boasts of the headiest of action setpieces, long and spectacular bits of movie wizardry dreamed up by grown men who like pushing their action figures to the limit.

A lot of superhero movies look alike now, with increasingly incoherent action populating most of them, but this is a pleasure: these set-pieces feel like big, expansive, boastfully huge splash-pages -- the kind of pages created by a master storyteller and a truly gifted artist, the kind of pages where there’s a clear idea behind the explosion, where the scene and its contents truly merit the riotous RAKABADOOOOM sound where the letterer goes to town.

The kind of pages that you stare at for a while, refusing to flip ahead, grinning at it all.

(The kind of pages, also that don’t really need 3D conversion; I recommend you watch this film without the big glasses.)

Cheekiness seems to be Black’s mantra, thankfully. Things get a bit sloppy near the end, and it is often that the film recklessly veers towards Deep and Meaningful, but there’s always enough of a wink to ensure things stay entertaining.

Even when the climax gets far too long drawn out, you know who to root for because of the crackling narrative and, of course, the actors.

Gwyneth Paltrow’s Pepper Potts is an increasingly important part of the Iron Man franchise, and this installment lets her bring some serious spunk to the table. Plus she really knows how to nail a line, delivering it flat, cold, with brutal brilliance.

The beautiful Rebecca Hall is mostly wasted as one of Stark’s onetime flings, but, after watching Scarlett Johannson in the last film, those of us Iron Man fans who love Vicky Christina Barcelona must start petitioning Marvel to get us Penelope next time.

Don Cheadle’s Rhodey is reliably strong, and Jon Favreau’s Happy Hogan as likeable as can be. On the other end of that spectrum stands overzealous scientist Guy Pearce, hamming it up unimpressively.

It is Sir Ben Kingsley’s Mandarin who turns out to be a truly clever construct, a character written for another time and cannily made relevant today, and Kingsley plays him with great flair.

A young man called James Badge Dale is quite terrific as an evil henchman, and Ty Simpkins, playing the kid who befriends Tony, is spot on.

And then there’s Robert Downey Jr, immaculately inhabiting both suit and smirk. The actor has taken the character and really, really run with it, and his version of Iron Man -- younger than the comics, less of a drunkard, as much (or more) of an egomaniac -- is now more definitive than the character in the books.

He does the impossible: playing it cool and yet coming off grandiose. Bravo. Tony Stark seems as much a part of RDJ’s personality as he does a mask, and perhaps the actor inside the armour will find it hard to imagine leaving the character, this wonderful career-altering character, behind. For now, though, he’s our Iron Man.

No two ways about it.

And he’s in the best hands. “I got you,” Pepper says as she saves Tony, in an echo of that most unforgettable scene from Richard Donner’s Superman, the most iconic man-woman moment in all of superhero cinema.

Stark looks up at her, refuses to blink, and says “I got you first.”

From one True Believer to another, thank you, Shane Black. Iron Man has never soared higher. 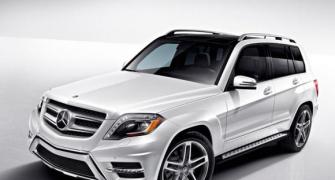 ICONIC off-roader Mercedes GL Class to hit roads in May 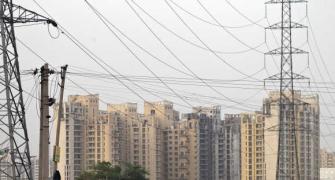 Housing prices ZOOM in these cities 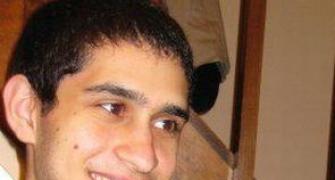 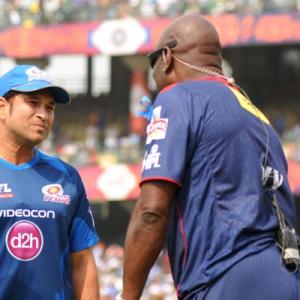