Review: Into The Storm: Superlative VFX, sloppy everything else! 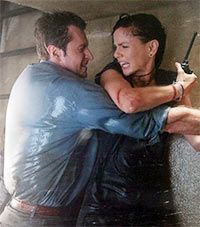 Visually, Into The Storm offers quite a sensational depiction of multiple tornadoes but where plotlines and performances are concerned, it’s distressingly sloppy, writes Sukanya Verma.

After witnessing a summer full of devastation from superheroes, monsters, apes, dragons, transformers and aliens, magnitude seems like an overdone model. Just how much (and often) can one wow over people and property being clobbered down to mindless debris?

It works wonderfully when there’s judicious use of VFX to enhance the story-telling and vivid imagination. But some prefer to solely rely on the competence of computer-generated fakery, which cannot conceal their own creative complacence.

The mostly average tornado spectacle, Into The Storm, falls in the latter bracket. Visually, it offers quite a sensational depiction of multiple tornadoes hitting a fictional Midwest town, Silverton. But where plotlines and performances are concerned, it’s distressingly sloppy.

Disasters born out of natural calamities both warn and punish mankind for its tendency to meddle with nature. But director Steven Quale treats the growing repercussions of global warming as a premise to manufacture theme park thrills whilst haphazardly pointing out the gizmo-armed generation’s obsession of filming and uploading ‘footage videos’ on the net.

What he does with cheap glee is to project cyclones -- not so much as nature’s way of saying beat it – but as a killer vortex of wild winds on a rampage, striking down one site after another like a spooky serial killer of a horror movie.

Into The Storm, made in almost about half of Twister’s budget, takes its time in jutting out those enormous, deadly swirls. Its first 20-30 groan-worthy minutes are squandered in introducing the viewer to all the dummy characters Quale expects us to care about by the end of the ordeal.

Parallel track follows a team of storm chasers -- canny lady with software loaded laptops and instincts (Sarah Wayne Callies), bossy guy with a grand dream (Matt Walsh) and their mandatory sidekicks with bulky cameras to shoot it all.

There is also a bunch of smashed thrill seekers (Kyle Davis, Jon Reep) who pop up and out to lend Into The Storm its occasional bout of hilarity.

Neither do these actors have the charisma to get any sympathy nor does its phony, cliche-crammed sentimentality permit its likelihood. Once, however, the storm gets rolling, it obliterates everything in sight, including the severe ineptness of its impassive, vapid actors.

Barns and buildings, trucks, buses, cars (no cow this time) are sucked into the feverishly spinning cyclone’s mouth till the screen transforms into a kinetic explosion of environmental fury.

Some of these frantic images coupled with exceptional detail to sound, especially the waltz of the planes and the blazing tornado are truly spectacular and salvage Into The Storm from being a complete (since we’re on the subject) disaster.