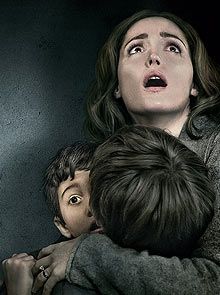 While Insidious Chapter 2 is not for the faint-hearted, seasoned horror flick fans may find it insipid, says Paloma Sharma.

When Josh Lambert was a child, he had a gift.

While asleep Josh could leave his body and drift off into a world beyond that of the living, called the Further.

When the dead start tormenting him, his mother enlisted the help of paranormal investigators/psychics/witch doctors to erase the knowledge of his ability from his memory.

But years later, when his son goes into a deep sleep and is unable to come out of it, having crossed over to the other side, Josh (Patrick Wilson) must use his gift of astral projection to bring his son back. However, when Josh does bring his son back from the Further, the Lambert duo isn't the only ones who have crossed over.

Insidious Chapter 2 picks up exactly where Insidious left off and therefore it is unadvisable to watch this film without having seen the prequel.

That said, it does not succeed at explaining things. What’s really mysterious about this film is how James Wan, who also directed The Conjuring, could have co-written a film that turned out like this.

Insidious Chapter 2 relies on too much assumption. While I do understand that this film is a bridge between Chapter 1 and (as the end has implied) Chapter 3, it is important for the makers to remember that this a whole film in itself and not merely a void that had to be filled in order for the complete story to be comprehensible at the end of the franchise -- which I hope it will be.

The film is replete with unanswered questions such as:

1. Why did Parker Crane’s mother abuse him and why did she want him to be a girl?

2. If both Parker Crane and his mother are dead then why have they never interacted in the Further?

3. Why is Josh able to wrestle with demons in the Further without the demons being able to use

their supernatural abilities against him as they do in the real world?

4. Why are all the dead people in the Further white? And why are they all dressed like Marie Antoinette ordered them to the guillotine?

Most fear-inducing tactics and the character of Peter Crane have been heavily borrowed from cult horror films such as Psycho, Silence of the Lambs and The Exorcist.

Most of the times, the director does manage to have the audience at the edges of their seats, waiting for something to happen. Only, it never does. The thing about underplaying things is that it doesn't work with horror films. You need to give the audience raw, arctic fear.

If the story had been spun better, it might have been called multifaceted. But all the way the director has handled it has rendered it into a mess and the shoddy, almost shaky camera work has made it almost absurd.

The simplest of light and sound effects form the spine that the body of eerie visuals rests on in the horror genre but badly (not forebodingly) lit corridors and staircases characterise the film as the shrill, overbearing 'dan dan daaaa' theme plays in the background.

There is not much to say about individual performances. It would be a waste of time.

Insidious Chapter 2 is based on a fairly interesting and not widely explored concept.

Astral projection could be a truly horrifying, especially when one's child is involved. Despite this the film fails to give you too many goosebumps. There are moments but that's all there is to it.

It is futile to watch this film without watching the previous one. Homework becomes an extremely important part of your viewing experience here.

Insidious Chapter 2 is definitely not for the faint-hearted but if you're a seasoned horror fan -- by which I mean, if you have peed your pants after watching Poltergeist at age 4 -- then you might as well skip this and watch Sansani.