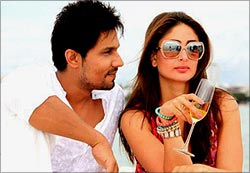 Formulas have a shelf life too. And styles fade.

But if Madhur Bhandarkar thinks by tweaking his standard format of rise and fall (Page 3, Corporate and Fashion) of a female protagonist to concentrating on an absolute decline, he has made some sort of a breakthrough, he's only kidding himself.

This time he sets his story in the glamorous but hardhearted world of show business where the heroine's shelf life is unfairly shorter than her male co-stars and the pressure to stay afloat is unrelenting.

This is a subject of vast possibilities and sure-shot entertainment but there's nothing innovative about Heroine. It's more of a stylist's dream given the gorgeous range of designer clothes and edgy make-up Kareena sports in the movie.

Same old jibes, insecurities, conflicts, threats and scandals. Not to forget his constant obsession with homosexuals as objects of ridicule, be it in Heroine's visibly effeminate fashion designer, gossip-hunting reporter or a multi-purpose sex toy. The latter even remarks, 'Is industry mein zip aur zubaan dono sambhal ke kholni chahiye (One should open their mouth and zips with equal care).'

I am not sure if this is Bhandakar's idea of comic relief but the hall roared with laughter.

What's not funny is just how stunning Kareena Kapoor looks or gives to her role as Mahi Arora, the erstwhile toast of town now languishing in a corner of reject and infamy. She's a product of a dysfunctional family, an indifferent mom and her politician boyfriend and surrounded by a staff that couldn't care less (barring her uncharacteristically polite secretary, Govind Namdeo).

At first Mahi appears in complete charge of her career and overconfident, or maybe naïve enough to overlook her competition focusing on her doomed romances with first a superstar (Arjun Rampal, wasted) and, later, a star cricketer (Randeep Hooda, wasted).

Her relationships reveal her unstable, unsure and problematic side, which Bhandarkar conveniently blames on a bipolar disorder, for which she receives psychiatric treatment. When she finally realises her dipping fortunes, Mahi subscribes to clever manipulation and wicked strategy.

Till this point, Heroine is predictable yet watchable but it nosedives completely when she loses ground in both her personal and professional life. The premise itself had the potential to draw an engaging portrait of a complex leading lady and her turbulent life but it never skims past the superficial.

How do you take a film seriously when all it has on its mind is to somehow convey all the juicy tittle-tattle Bhandarkar has accumulated over the past two years in the name of research? Think of stars who were in the news for passports concealing their real age, sex tape leaks, controlling the editing of their movies, promoting the item girl over the leading lady, throwing tantrums over performing at award functions unless given promised trophy and so on and so forth.

How do you care for a character that's neither about triumph of spirit nor being a victim of abuse?  Unlike The Dirty Picture (which by the way has nothing in common with Heroine except ample show of cleavage) where Silk's professional and physical collapse led to near destitution and disgrace, Bhandarkar fails to convey what's eating Mahi -- failure in romance or slipping career?

Instead of spreading out her character through a real storyline, he only confuses her and us with hardly fleshed-out if not unnecessary impulses, like working on an art film with a four-time National-Award winning filmmaker (Ranvir Shorey is delightfully grumpy and short-tempered) which never gets completed  or a sudden itch to adopt a child.

Although working on that small-budget film leads to an exciting scene between her and Shahana Goswami (it's a short part but she lends it credibility). Unfortunately, in Heroine everything strikes as so deliberate, it's hard to tell the thin line between bold and sensational.

I'll make an exception for Kareena though. So, yes, she darts off F-words and other expletives, chain smokes and reveals a fair amount of skin (and dark circles). At the same, she's so effective in the scenes where she appears her most vulnerable and wounded. The actress has never used her eyes this emphatically before; they change their colour and sparkle with the tone of a scene.

But Bhandarkar seems so enamored by his electrifying Heroine he probably forgot to say 'Cut' during the last half hour, which seems like a never-ending audition of a nervous breakdown making Heroine overbearing, desperate and agonizingly long.

The film ends on an abrupt and futile note making everything that happened before a waste of time.

Think Heroine will become a hit? TELL US! 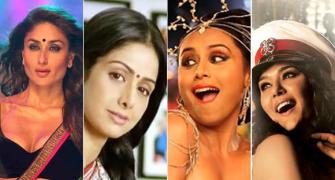 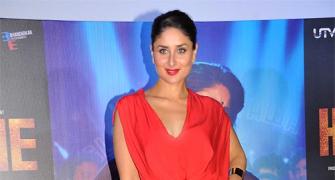 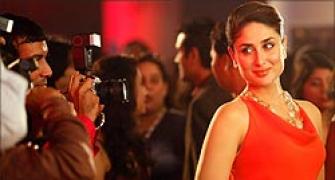