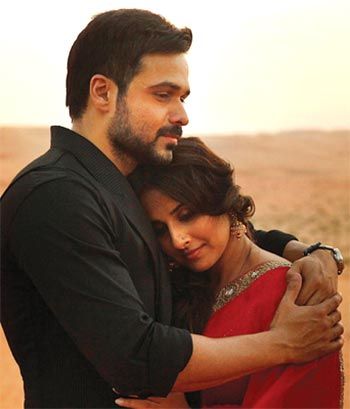 Her character, Vasudha, is a timid and relatively mousy woman, one who has let herself be cowed down by patriarchy even when no patriarch is present in her life, and she frequently flies into panicked hysterics.

But the character and her motivations are not why I think Balan -- one of our finest actresses -- is crying.

I think she’s weeping her eyes out because, with every take, she realises how unforgivably atrocious this film is.

Mohit Suri has been an efficient director of plot-heavy cinema (with plots often filched from other places), a man who trades almost exclusively in weatherbeaten movie cliches but has always done so with some speed and slickness.

This time, working from a script written by Mahesh Bhatt, his focus appears to be not story but, simply, sadness.

Everyone in this film, in virtually every frame, looks pained.

The relentless background score swells to a crescendo, and then swells up again, to another crescendo.

The characters are all pathetic folk with twisted childhoods.

The word ‘mangalsutra’ is made massively heavy (while the word ‘terrorist’ is used with remarkable casualness) and there is much, much bad parenting on display.

Merely totting up many a sad element doesn’t create heartbreak, however, and grand tragedy cannot be stitched together like Frankenstein’s monster.

What we have here is Suri’s monstrosity.

He has left, in their place, a novel he has apparently written on the fly instead of a letter of explanation, and it is this that his long-neglected son reads and sobs over.

It is a novel, that, peculiarly enough, is not told from the narrator’s point of view and contains too little about himself, preferring instead to dwell on voyeuristic imaginings of what his wife Vasudha and her lover Aarav must have gotten up to.

The film is a dreadful drag, with godawful dialogue.

“Looks like you love your job,” Aarav says, played by a bored Emraan stating revelatory facts so often here that his name may well be Exposition Hashmi.

Aarav, a self-made billionaire with a truly miserable childhood, offers Vasudha a job in Dubai.

Vasudha, who has been lying to her young son about the father, Hari, that mysteriously deserted them five years ago, decides with much deliberation to take the job -- and promptly deserts said child instead of taking him along.

As for Hari, he may or may not be a terrorist, depending on what you want to believe about a story where trees double up as get-out-of-jail-free cards.

Also, Hari is the worst kind of misogynist, believing he owns Vasudha forever.

Vasudha… It is a name that unfailingly reminds me of Jaya Bhaduri in Hrishikesh Mukherjee’s classic Chupke Chupke, where at some point while spelling out her name she is interrupted by her sister and called an ass.

Balan’s Vasudha is far more asinine, an apparently independent and well-educated woman who is aware of her husband’s appalling behaviour, is freshly disgusted and surprised by it each time.

When told he’s a terrorist, that seems to matter less to her than the fact that he hasn’t called.

Meanwhile Suri ladles on the sad cliches, lifting clumsily from the most iconic tragedies.

At one point Hashmi stiltedly caresses Balan’s chin with a flower, presumably thinking of Mughal-E-Azam.

The film’s most catastrophically bad scene comes from An Affair To Remember, in which Hashmi takes Balan to see his piano-playing mother (as opposed to Cary Grant’s piano-playing grandmother).

The mother plays said piano while Hashmi, standing in the same room, tells Balan about her sad life.

He then walks up to the mother and she’s stunned to see him. (Time and again in this film, characters are startled by other characters already being in the same room as them; this, I wager, is because the background score makes sure they can’t hear anyone approach.)

They talk for a bit before the mother notices Balan.

She turns to her and asks, with a beatific smile: “Arre, yeh banjaaran kaun hai?”

Then she, a former cabaret performer and apparent clairvoyant, starts telling her about how she shouldn’t live in the past, should not be a Sati or a Sita -- even as this mother herself is spending her life playing muzak to her comatose husband. (I’m told this mother is played by the lovely Amala Akkineni; I choose, for her sake, to not believe this.)

It is a film where three fine actors all play idiots.

Hashmi’s character keeps going off to literally smell the flowers, Rao’s character is a possessive neanderthal, and Vidya’s character is plain dumb -- for one thing, she needs to know that yelling “Hari! Hari!” as she runs behind a police jeep will only make the cops drive faster. 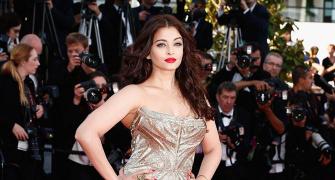 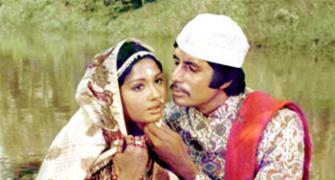 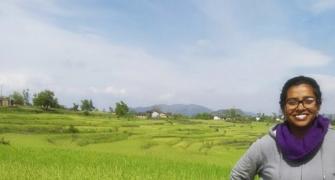 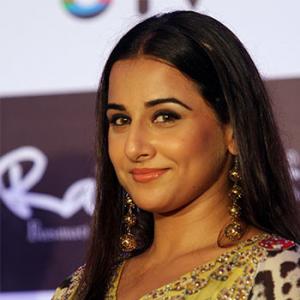 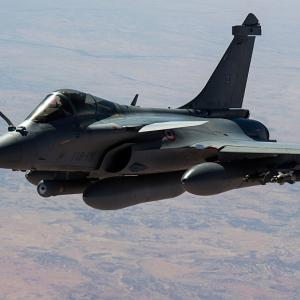