Review: Half Girlfriend is a full-fledged fiasco! 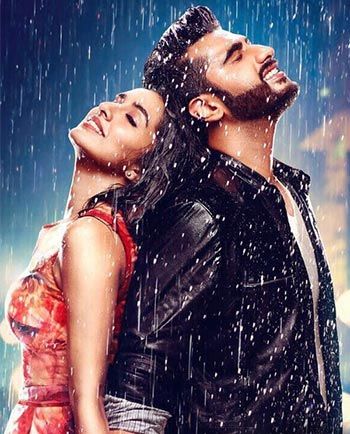 The constant issue in Half Girlfriend is its wimpy characters and the contrivances they resort to arrive at its predictable conclusion.
Stupidity is responded with equal, if not more, stupidity, notes Sukanya Verma.

Half Girlfriend is the sort of poppycock where a guy from Patna comes to New York City to do an internship at the United Nations in collaboration with the Bill Gates Foundation by spending all his time visiting pubs and getting sloshed.

Elsewhere he'd get the boot, but in Mohit Suri's film, his waywardness is rewarded with a job offer.

Based on a novel by Chetan Bhagat, Half Girlfriend pitches Madhav Jha (Arjun Kapoor) as a humanitarian endeavouring to set up toilets in his mom's school and promote girls education, an undertaking he conveniently forgets in his preoccupation to find a girl in NYC's live singing bars on the basis of what caught her fancy as a 12 year old.

Bhagat's books owe much of their cinematic success to the brilliance of filmmakers like Rajkumar Hirani (3 Idiots) and Abhishek Kapoor (Kai Po Che!) for creating something credible out of unwieldy inspiration.

But in inept hands, the commonplace conventionality of his writing sticks out like a sore thumb.

As you may have well understood by now, Half Girlfriend belongs to the latter category.

In this excruciatingly flimsy film, Madhav, a brawny, basketball-playing Bihari lad, seeks an admission to study 'samajshastra' (sociology) in a premium Delhi college.

The committee conducting his alumni interview, in an accent that's so wannabe British, call attention to his lumbering English speaking skills. But this ineptitude serves as a bait to befriend the campus Barbie, Riya Somani (Shraddha Kapoor).

Riya, the proverbial poor little rich girl, arrives in a chauffer-driven luxury car, sports trendy fish braids to play basketball, carries her text books in Bottega Veneta totes and breaks into a slo-mo spin to revel in the joy of unexpected downpour.

Riya's grand home is a scene of domestic violence where singing and strumming guitar her only escape. But in Madhav, she sees a distraction, one she's willing to invest in if only partially.

Basically, let's stick to first base and high-society champagne brunches where some guests gift costly solitaires and rub it in too.

Bizarrely enough, Riya's aversion to 100 per cent commitment riles Madhav's friends even more than him.

"Kaunsa half?" one of them probes on learning about her consent to be their pal's half girlfriend.

And because by the script's logic he's a village bum, he promptly sets off to find out resulting in an ugly altercation with Riya.

Suri tempers the crudeness of the original scene, but the chauvinistic mentality still comes through.

The constant issue in Half Girlfriend is its wimpy characters and the contrivances they resort to arrive at its predictable conclusion.

Stupidity is responded with equal, if not more, stupidity.

Characters get married on a rebound for a relationship that's barely a few months old.

Characters get worked up about their friend's love life like it was their own.

Characters engaged in women's liberation raise question about a girl's moral character because she refused to stay in a bad marriage.

Characters fake cancer because, who knows, Ae Dil Hai Mushkil is still fresh in their mind?

The sole purpose of this stuffy confection, which feels twice its 135 minutes length, is to prolong the union of its two protagonists as long as possible by throwing in one lame twist (and whiny Arijit track) after another.

Arjun Kapoor does earnest and facetious pretty well but in Half Girlfriend his spontaneity is caged inside a single-minded goal and an accent that isn't his natural one. The uneasiness shows.

Meanwhile, Shraddha Kapoor confuses Riya for a pretty zombie and blankly reads out her dialogues. It's such a staggeringly vacant performance; a life-size standee could have done the job.

Speaking of which, the most gut-busting moment in Half Girlfriend arrives in the, er, form of Bill Gates.

To witness the philanthropic Microsoft founder's head superimposed on a body double, hearing out Madhav's request for funds, is comic and creepy at once.

Often during his speech Madhav nervously pauses almost as if to check Gates' head is still in place. For sure the film's is not.