Review: Guardians Of The Galaxy is a stunning success 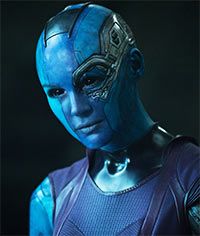 It all begins with the most, most ideal song.

Not just is I’m Not In Love a smashing mid-70s anti-ballad dripped in cynical coolth, a suitably atmospheric song as crammed with irony as Marvel’s latest (and weirdest) blockbuster aims to be, but it happens also to be the work of a brilliantly daft British band who called themselves 10cc because they claimed to literally have more, um, spunk than anyone else. And if there is one thing James Gunn’s Guardians Of The Galaxy is positively brimming with, it is spunk.

Because, contrary to what the "From the makers of The Avengers" tag might tell you, this is the riskiest of comic-book movies, a delirious outer-space romp featuring an obscure, unknown band of misfits. It has no major stars -- fine, there are two well-known leading men, but neither appears on screen.

It is an action-adventure that realises the need for wit in adventure and the need for charm in action. It doesn’t feature cameos from Iron Man or Hulk or any of the regular Marvel Comics heroes whose t-shirts we own already. And yet here it is, this massive-budget whimsical 3D-jellyfish of a movie, one hard to stop staring at.

We meet Star-Lord on a deserted planet. Walking into a cavern, he hits a button on his Walkman, breaks out more 70s awesomeness, and begins to boogey. Small purplish dinosaur-iguana hybrids show up and this man -- our ludicrously self-assured hero -- kicks one aside without missing a step, picking up another to use as a makeshift microphone while lip-syncing his way through lethal territory. Like Indiana Jones, were he a karaoke fiend. He’s not alone. Everyone in this film is bizarre and atypical, and all these freaks make for a thoroughly unpredictable melange. Like Star Wars, then, had Star Wars been confident enough to laugh at its own looniness.

The thing about Star-Lord… oh hang on, nobody really calls him that. The thing about Peter Quill, intergalactic lothario and space scavenger, is that he’s a ball of fleet-footed fun. Things invariably go belly-up, but -- armed with his songs -- he coasts along with pluck and smarts, despite frequently appearing clueless. On his way, he befriends Gamora, a fantastic, fatal woman with green skin; Rocket, a canny opportunist who hates to be reminded of his resemblance to a raccoon; Drax, a guileless brute built like a mountain; and Groot, a walking tree who likes to introduce himself rather often.

The plot is simplicity itself, involving jailbreaks and chase scenes and a stolen orb and seemingly impossible missions, all of which sounds like (and, admittedly, is) regular superhero movie hokum. Except Gunn throws it together with a lighthearted, Pixarry swiftness, giving us a refreshingly frothy ride with genuinely memorable characters. The cast is exceedingly well-chosen, with the highly affable Chris Pratt proving quite the swashbuckling fool, bestowing his character with both recklessness and vulnerability -- most visible when he’s plaintively (and, for once, honestly) trying to convince a girl that he’s just done something exceedingly heroic. Zoe Saldana is a striking Gamora, wrestler Dave Bautista is pleasant as the oafish Drax, and Bradley Cooper is most entertaining as the voice of Rocket. But it is Groot -- voiced by Vin Diesel, who, it must be remembered, shone in Iron Giant long before The Fast And The Unending -- who makes for a powerful yet truly melancholic figure.

Gunn’s is an emotionally straightforward yet effectively evocative tale, one that works better because of how nimbly it leaps ahead. And so much, indeed, is so quotably funny -- Drax’s simple-minded Obelixian drollery; Rocket’s wiseguy sarcasm; Groot’s last line; Gamora’s insinuation that Quill’s attempt to dance with her is “pelvic sorcery;” Quill’s confession of being so prolific that a black-light on his ship would make it look as spattery as a Pollock painting -- that it’s easy to overlook how this is unquestionably the best looking Marvel movie of all time.

When we first read comics, heck, when we first saw them -- before we could applaud character growth and motivations and morality -- we breathed in their mad art. The legendary artists gave us heroes, sure, but more than that they gave us worlds, vivid eye-popping universes chock-full of wondrous surrealism, big splash pages loaded with so much spectacular detail that we’d pore over each panel for hours, looking at it from different angles to try and fully grasp its amazingness. More than any other comic-book movie, Guardians Of The Galaxy, with its psychedelic palette and its ridiculous attention to detail, recaptures that sense of awe, that loud pop of wow that made the funny pages magical. Bravo, cinematographer Ben Davis and production designer Charles Wood.

The action scenes are both coherent and dazzling, but I want to see Gunn’s film again just to gape at what isn’t front and centre. A trafficker of stolen goods laying down thin slices of gold and graphite to play a game of solitaire; Gamora sucking at a fruit that could be both mango and oyster; Groot forming an intricate shield-of-branches with one hand; a lethal arrow obeying its master’s whistle; the villain looking like an HR Giger version of The Undertaker; an evil ship looming above a city like a filleted backbone; the severed head of a god serving as an outpost planet; and those who ravage this crazy space — god bless Joss Whedon -- wearing red coats.

Guardians Of The Galaxy takes place in a remarkable world drawn lovingly and beautifully by imaginative folks low on skin-coloured crayons. A world that holds not merely quirks but nuances. These are worth beholding, worth gawking at. These are… marvels.