Review: Gangs of Wasseypur 2 is fantastic but too long 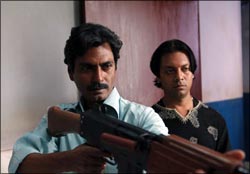 Anurag Kashyap shines once again in the concluding part of Gangs of Wasseypur even though the film is a tad too long, writes Raja Sen.

A man dies, and revenge is sought. That is strictly all we need to know, the rest falling into place as it goes along.

Backstories and complicated genealogies are frankly rather extraneous in this bloody, bullet-riddled Anurag Kashyap world, where we choose our allegiances to characters based on the movie stars they idolise and the songs they hum. Who shot first isn't as important as whose shot looked sexier.

And lest that sound like a deterrent, I assure you it isn't. Gangs Of Wasseypur II is a damned sight better than the first part, because a lot of the cumbersome subtext is already out of the way when the impressively visceral khoon-kharaba of the second film begins. Having dispensed with the potatoes, this film's pretty much all meat. And quite a feast it proves to be.

Sure, it is hours and hours of foreplay with an inevitable climax, but when done masterfully, there is much pleasure to be had in gambits and gulcharras, in, well, toying with one's food. The khilwaad before the maar is where Kashyap genuinely shines.

Part of this is because Kashyap, in pulling out all the stops, seems content here to let his madcap characters actually enjoy themselves a great deal, making for a far sillier -- and decidedly more joyous -- cinematic universe.

His badlands have now more puns than guns, and there is much ludicrousness on offer. Everyone's having a blast (often literally) and while these savage characters inexplicably decide, after a while, to hold off on the actual revenge angle of the saga, the digressions are often written, performed and shot with enough ingenuity and cinematic panache for the story not to matter. This one's a ride -- albeit not one for the queasy of stomach or the impatient of bladder.

Manoj Bajpai, patriarch of the first film, is gunned down a la Sonny Corleone, his sudden death immediately turning his eldest son, Danish (a compellingly great Vineet Singh) into a slaphappy Sonny himself.

Younger brother Faizal, forever crafting a mix for his chillam, couldn't care less until events -- and a scornful mother -- jolt him out of stoned apathy. It is here that we see the uncaged intensity of Nawazuddin Siddiqui, alone reason enough for this film to be celebrated. With the ruthlessness of a pissed-off panther, Siddiqui's Faizal goes on the warpath, a natural despot softened only when rushing towards his voluptuous lady. When on the Three:Ten To Huma, so to speak. 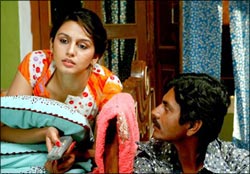 The women are as important to the proceedings as the men, if not more, even if deprived of screentime. Huma Qureshi's Mohsina is a plucky stunner who fearlessly keeps Faizal on a leash, while the marvellous Richa Chaddha, the highlight of Part One, impressively evolves into a sunken-eyed but perenially confident matriarch. There is a visible Indira-ism to her look, just as there is a touch of Jayalalitha to her rival Reema Sen's visage: the wife and the mistress, the mothers presiding over the great, guttural divide.

The men have no such overarching narrative requirements. A schoolboy, slippery of tongue and morality, is named Perpendicular and fellates razorblades for fun, a character as memorable as can be. His bastard brother Definite -- played very well by the film's writer Zeishan Quadri -- is a fatally fearless opportunist and a Salman Khan devotee: a tribe who, as I've come to know over my years of messageboard feedback, are singularly frightening and most unpredictable.

Kashyap's film, in fact, is a lot about our cinema. Faizal fashions himself after Amitabh Bachchan but snaps when realising he might actually be Shashi Kapoor, Bachchan's frequent sidekick, instead. Despite his mercurial rise, he starts becoming less relevant at a time when Shah Rukh films dominate the world -- DDLJ plays in Wasseypur movie-houses even as Dil Toh Pagal Hai posters promise the future -- and when Definite, his hairdo-loving heir apparent, hears there might finally be a warrant to his name, he sings the Maine Pyaar Kiya lyric "Pehli pyaar ki pehli chitthi" in the hope that he might finally graduate with criminal dishonour.

Composer Sneha Khanwalkar's super original songs -- Kaala Re is this film's big, big winner -- is overshadowed by familiar songs from our past. Indeed, Tigmanshu Dhulia's geriatric godfather even claims the only reason he's outlived all his foes is because he doesn't watch movies.

We who do buy gladly into Kashyap's madness. Yet the film, eventually, starts to wheeze under the weight of its own winking. The first shot from Part One appears here, not as Part Two's climactic sequence, but somewhere after intermission and a long way from the end. It is thus not a circle but a spiral, this narrative, and concentric storytelling can be awfully repetitive. No matter how whimsically the tale is told.

Too much is unbearably cutesy -- "set right-va karo ji" goes a frequently repeated song exhorting the hero to fix it -- several chunks are entirely unnecessary, and the plotting can be almost moronically frustrating, as evidenced by a mildly amusing but mostly pointless sequence featuring vegetable shopping, dhoti-tying and incompetent assassins. With the film by now into its fifth hour, this fluff exhausts.

And yet, for all its folly -- and the fact that an hour could have been lopped off its running length, easy -- Gangs Of Wasseypur II provides enough cinematic memorabilia to single-handedly last us the summer.

Kashyap's visual flair has just grown with each film, and this one is not just cinematically self-assured but also highly nuanced: some of the touches -- like Mohsina's choice of paperback -- border almost on a Dibakarian immaculateness. Perpendicular Khan, meanwhile, like the Bob Biswas we met in Kahaani a few months ago, deserves his own graphic novel, pronto.

Like one of those unending strings of ladis, this is, then, a proper firecracker, even if far too long. Had Ramadhir Singh broken his coda and watched it, he'd have doubtless been gunned down mid-film, the length (and volume) allowing his foes more than enough celluloid cover to set up sniper-rifles, grenades and knifemen for the job. Sheer murder, surely.

Yet, like the inevitably doomed characters in this Kashyapverse, he'd have gotten to grin a few times before biting the dust.