Review: Fault In Our Stars is obsessed with making you cry 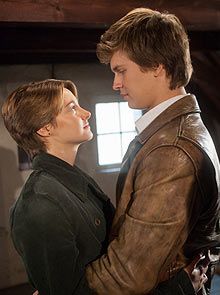 The Fault In Our Stars exists merely for the purpose of being soppy and pleasing the already existent fan base, writes Paloma Sharma.

...is probably what a lot of people would expect me to say after watching The Fault in Our Stars.

But I can't say that.

Like all fancy films based on popular young adult novels, coming from reputed production houses, The Fault in Our Stars was also made for a single reason -- the fans.

The Fault in Our Stars, the film, has everything it takes to make it the product for teens with a lot of purchasing power and very limited reading skills -- it has Barbie and Ken lookalikes to star as Hazel Grace Lancaster and Augustus Waters, it has cancer (and related issues of death and depression) and it has the promise of eternity.

Therefore, if one were to simplify this observation, it would read something like this:

If you haven't read the book, all you need to know is that the film isn't nearly as good.

Hazel Grace Lancaster (Shailene Woodley) is a 16 year old who has been living with stage four cancer for approximately three years. The experimental drugs she is on might have bought her more time, but she knows that she is going to die soon. Somewhere along the line, Hazel's cancer has become her.

But when she meets 18 year old cancer survivor Augustus Waters (Ansel Elgort), Hazel unknowingly embarks on an adventure that she could have never imagined even in her wildest dreams.

While all this may sound extremely romantic, it doesn't turn out to be much more than a race to see who dies first.

If you are a fan and you've read the book, then you probably won't enjoy the film as much. You will find that the order of events has been changed slightly, dialogues have been picked up from one conversation and inserted into another, and that a couple of interesting conversations you would have liked to watch on screen are missing.

Certain details have been overlooked as well. For example, Isaac's eyes seem absolutely normal and in no way huge, as John Green had described them in the book. Not only did they make Isaac's eyes smaller but they also forgot that he had long, blonde hair.

Also, Hazel doesn't wear the dress that Gus complimented her on when Isaac was having a psychotic episode. They don't even watch V for Vendetta, which is a shame because then you would have been able to see a sick, frail, almost broken Natalie Portman as Eve, who Gus thinks looks like Hazel, and compared her to a not very sick or frail or broken looking Shailene Woodley.

Woodley displays no signs of the swollen cheeks that Hazel keeps complaining about, and when Elgort delivers Gus' famed "and I'm in love with you" speech, you feel nothing.

The protagonists in the story, as well as the actors, are too perfect to be so troubled. It was strange how there were hardly any of the typically teenager mood swings or insecurities that hound adolescents, which, if you have cancer, only go on to compound the frustration that your disease causes.

You want to like these strange people who are playing the characters you've come to love, but you can't because the essence of the characters has been changed.

Hazel's mother was one of my favourite characters in the book but the actress who portrayed her, Laura Dern, came off as too anxious, too eager to be in the scene.

This makes you wonder if someone actually bothered to pick up a copy of the book before filming.

While The Fault in Our Stars isn't the greatest book in the world, it is definitely well written. But the twisted sense of humour that the book contains becomes lost as the story transitions to celluloid. The film becomes monotonous, lacking any intensity or mystery; the supposedly star crossed lovers have an awkward, almost forced romance.

15 minutes into the film and you begin to wonder why you're watching the film.

The writing is like a hurried piece of patchwork and the direction lacking vision. Its like someone went to a tumblr fanblog, picked up the best liked parts of the film, and made scenes out of them without being true to the story.

Although the camera work is good, the production quality is quite slick and one scene between mother and daughter genuinely make you cry a bit, the film exists merely for the purpose of being soppy and pleasing the already existent fan base.

The fault in The Fault in Our Stars is that it is so obsessed with bringing tears to your eyes that it forgets to bring substance to the table.