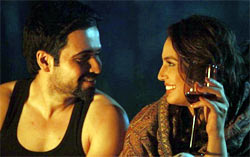 I never quite understood that old saying about witches having feet the other way around. Does it mean that their feet are backwards (toes to back, heel to front) or does it mean that the left foot is in place of right foot, like hurriedly discarded flip-flops?

Not knowing specifics, however, didn’t keep me from knowing the lore. The supernatural fascinates us all, with children often more drawn to the ideas of the fantastical because they gullibly (and willingly) believe, yes, but also because they are steered away from dark and morbid imagery, imagery deemed inappropriate for them. So naturally it becomes something worth eavesdropping, whispering, finding out about.

Kannan Iyer’s Ek Thi Daayan, based on a short story by Mukul Sharma, avoids the usual set of Bollywood cliches about tanktriks and shraaps -- all that bhootiyapa, if I may -- to introduce us to fear through a child’s eyes.

The line, between what we actually believe and what is conjured up by the feverish imagination of a young boy desperate to believe in legends, is blurred very effectively, and that is what makes this film so cleverly creepy, so intelligently eerie. It is, in many ways, a children’s film populated with grown-up scares. And for this originality it deserves applause.

The mood is set with the opening disclaimer, one that assures us that the film isn’t intended to promote witchcraft. Okay then. The opening credits are seriously old-school, bassnotes thumping through faded green images of Bombay with Rekha Bhardwaj singing a song that wouldn’t be out of place in Mahal.

Emraan Hashmi plays Bobo The Baffler, a highly successful stage magician in this fictionalised version of India where stage magicians can actually be successful. Like I said, old-school.

He’s a spiffy enough conjuror -- one of his big tricks even involves a switch between twins, as seen in Christopher Nolan’s The Prestige -- but visions of his past peskily get in the way.

It is a traumatised past, he concedes to his girlfriend sketchily, before confiding in a hypnotherapist instead. This leads us to a flashback which lasts through the first half of the film, and makes for pretty riveting cinema.

We first meet young Bobo aged around 10, in checked trousers and with an Afro. His kid sister, Misha, is hopefully devoted to him. Their names sound like they’ve come straight out of a Russian children’s book, and their story is as intriguing: Bobo pores over an old leathery tome about witchcraft and is convinced their elevator is haunted, and Misha laps up everything he says.

Their single father hasn’t yet, to the children’s delight, gotten them a stepmom. (“Do all stepmoms have to be evil?,” asks Misha. “They can be good,” Bobo concedes, “But they aren’t.”) Except one day the father meets a young lady in the lift, gives her a lift, and soon enough the stepmom void is filled.

is excellent. The narrative is constant, thrilling and filled with tiny detailing, supported by uniformly great acting and sharp, neat writing.

Hashmi is remarkably comfortable in his own skin and plays the role of an inevitable loner with a compelling masochism. He is the kind of man who will switch the lights off despite being spooked by shadows, and the kind of man women with long-tresses would do well to keep away from. Especially when he has a butter-knife within reach.

The three leading ladies -- Konkona Sen Sharma, Huma Qureshi and Kalki Koechlin -- are smashing in their roles, and I refuse here to tell you who plays who. Each plays their given role with frighteningly good flair, and each deserves a big hand. Much of that applause is justifiably stolen by little Visshesh Tiwari as the young Bobo, while Sara Arjun’s Misha is irresistibly cute.

And, as is the norm, Pawan Malhotra (as the father) and Rajatava Dutta (as the whiskey-swilling, tennis playing shrink) are top-notch.

Cinematographer Saurabh Goswami is challenged by a film that lives too much in the dark, but aside from an occasionally too-shaky camera, he manages much artful framing (my favourite moment is when the kids high-five each other by torchlight.)

It is as the film winds past the halfway mark that the cobweb appears to stretch past breaking point. There are too many false-scares, terrifying jolts that quickly turn tiresome considering they come from dreams, injected in an injudicious attempt to say boo.

This is the sort of creep-fest which is better creating an uneasy buildup than at actually scaring the pants off you, and perhaps it should have stayed goosepimply instead of going for the jugular.

Ek Thi Daayan isn’t a truly scary film -- though it will provoke nightmares in the young, and I strongly recommend all parents keep their children away from this one.

As if losing confidence in the narrative, the film tries to do too much in the second half -- with suddenly oscillating variations in tone and mood -- but thanks to performances and craft, it chugs along well enough. An ominous character called Lisa is introduced quite inventively into the story, and the film appears to hit the next level when that wonderful Yaaram song takes on a different meaning.

Alas, it is here that things start to go aground. Clues point so determinedly in one particular direction that they convince us the film must take the other route, merely for twist’s sake, and the climax unforgivably descends into B-movie territory. Suddenly there is too much malarkey and, worse yet, too much talking about malarkey.

A lot of which makes absolutely no sense. A film that started off smartly restrained sadly ends up cacophonic and, frankly, more than a little silly. By the time the actual end comes around, it’s hard to care.

Ek Thi Daayan, therefore, isn’t the scariest of horror films. It is, though, smartly crafted, highly original in its approach and a strikingly ambitious effort for the genre. The end is a let-down, but the film remains a fine directorial debut for Iyer. As Bobo tells Misha while giving her a glimpse into subterranean hell, ‘don’t be scared, look.’ “Daro nahin, dekho.”