Vishnu Manchu comes back after a short hiatus with Dhenikaina Ready, a fun Telugu film packaged with all the entertaining staples for a family outing, says Radhika Rajamani 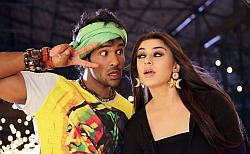 While the basic theme is taken from the Malayalam film Udayapuram Sultan, the writer BVS Ravi and the screenplay writers Kona Venkat and Gopimohan have added the required ingredients and flavours to enable director G Nageshwar Reddy to come out with a decent entertainer in the commercial format.

Suleiman (Vishnu Manchu) is the son of Baasha (Suman) and Saraswathi (Seetha). Stung by their inter-caste marriage, Saraswathi's father dies and her elder brother Narasimha Naidu (Prabhu), younger brothers Deva (Subbaraju) and Keshava (Ravi) are not on talking terms with Saraswathi.

On top of it, Narasimha Naidu even cuts off Basha's leg for marrying Saraswathi. All this is revealed in a flashback.

Basha goes to court for a share in the property and after two decades, the judgement comes in his favour. Suleiman realises his mother is not happy and wants the families to unite. He gets a chance to enter the house of Narasimha Naidu to perform a yaagam on a case of mistaken identity as Krishna Sastry thanks to Bangara Raju (Brahmanandam).

There he meets Narasimha Naidu's beautiful daughter (Hansika) who falls in love with him. Will he unite the families or not? There is another track involving another villain played by Kota.

The situations may look ridiculous and illogical (thanks to the Hindu-Muslim presence) but warrant laughter as the lines and the action tickle the funny bone. Underlying all this laughter, the director sends his message across without sermonising.

The film has its share of songs (even shot abroad) and dances and quite a few action sequences too. There's nothing really different in the film -- it follows the routine, predictable path but entertains as it moves along.

Vishnu is believable as Suleiman/KrishnaSastry. He has not just danced well (some of the steps seemed mindboggling) but also fought well. His comedy timing is apt and his scenes with Brahmanandam are entertaining.

Brahmanandam is the other key character around whom the tale moves. He is at his usual best. Hansika looks just about okay and doesn't have much to do. Her role is not sketched properly as most heroine roles are in such films.

Some of the songs have foot-tapping music. The film isn't too long and therefore though there are some pockets of tedium, it doesn't test your patience for too long.

This formulaic Dhenikaina Ready makes for an enjoyable watch if you don't go searching for answers to questions!