Review: Dabangg 2 looks all too familiar 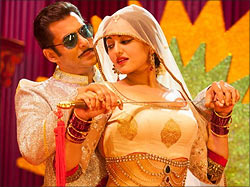 Munna's argument in Rangeela is both practical and effective. And it's in the honest presence of these collective Munnas and Milis that you truly discover (and enjoy) the epic accomplishments of characters like Chulbul Pandey.

That he is played by another influential Khan, Salman, known for his undeniable and indescribable hold on this very 'public' only adds to the distinction. And so his current slew of films (offering a varying degree of masala between avoidable and amusing) are best enjoyed with their real source of fun -- the audience.

And, believe me Pandeyji, Tiwarji and Chaubeyji, this writer had a blast watching Dabangg on Eid 2010 at a theatre packed to its capacity by a noisy, rambunctious crowd. Yes, the dippy escapades of a self-styled Laalgunj cop with a penchant for flatulence-themed threats and Rajnikanth-inspired sunglasses pleased me enough for it to find a spot among my favourite films of that year.

This morning too, when he re-introduces himself (by leaping out of a jeep bursting out of a wall amidst a slo-mo shower of fibre-glass shards), figmental wolf-whistles escaped me involuntarily. Fisticuffs with a Gapoo to rescue a Papoo lead to a comic interlude featuring a familiar goon with a ringing mobile. Wanted's Jalwa makes way for Ready's Dhinka Chika to underscore the uninterrupted box office might of this franchise's mainstay. It's time for the opening credits to roll and recap the events preceding the sequel.

In the tradition of the first one's quick-footed action, Dabangg 2 also maintains a breathless pace wherein Salman takes a break from wisecracking around his entourage of well-meaning, equally witty sycophants to transform into an unstoppable Hulk (with AND without shirt) to swirl the baddie like a bat that's just hit a century only to dent it across a dusty car, grunt like he's crunched a shelled walnut, shove an SUV like a puny sidekick, smash a man's neck like Raat's possessed Revathy, break into a Hud Hud Dabangg on Kanpur's bustling Birhana Road, shields himself from a bullet onslaught with a hapless refrigerator and socks that all-familiar punch into jaws that then quiver like deflated balloons.

Did I say familiar? That's the trouble with Dabangg 2. Within 15 minutes, the novelty wears off. Our one-man Expendable has already done this and better in the previous installment of the franchise. And as much as he tries there are only so many ways a man can play himself.

When Salman Khan first portrayed Chulbul Pandey, everything was refreshing about him -- the moustache, the mannerisms, and a new brand of masculinity that giggles, jiggles and takes a

Moreover, even for a standard potboiler involving revenge and over-the-top heroics, Dabangg did have a cohesive plot and clarity in the manner Chulbul was written -- his strained relationships with his stepfather, half-brother, his whimsical romance with a drunkard's pottery-passionate daughter, his wry humour that worked both as a defense and offense mechanism depending on whom it was directed at and a mercurial temperament that fits Salman's personality like a glove while giving his co-actors something substantial to work with.

Arbaaz Khan, who turns director with this film, embraces the task of taking Chulbul Pandey's saga ahead from where Abhinav Kashyap left off. He does well when it comes to preserving a super popular character's appeal but plays frustratingly safe by refusing to try anything different or inspiring.

Besides shifting from Laalgung to Kanpur and planting a new (read stale) villain -- the rowdy Bachcha (played by Prakash Raj, forget his performance, I am genuinely concerned about eyeballs falling off at the rate he keeps dilating his pupils) with the same old back story -- high political connections and two equally vile brothers Chunni (Nikitin Dheer in a performance that makes you wonder what glares more? His purple brocade kurta or that permanent scowl on his face) and Gainda (Deepak Dobriyal as the only menacing element about this flick) creating havoc in the industrial town best loved for its leather and ladoos -- Khan leaves Bade Bhaiya to save the day and film.

The latter tries, valiantly no doubt, and holds it together even as you pass those breezy 129 minutes in the hope of something unexpected, something cooler, something to attest that bang with an extra g in its title.

Even the sultry appearances put in by Kareena Kapoor and Malaika Arora Khan bop about the same old template and ambiance in flashy chart-toppers.

Speaking of songs, it's the only time Sonakshi Sinha, who made her debut with the first film in the series, shows up wearing ugly clothes and a sour expression that makes even more sense considering her role's length.

Ditto for Arbaaz Khan, the erstwhile troublemaker Makkhi is designated to dimwit Makkhi disappearing for long spells, presumably behind the camera, while Salman holds the fort in front.

Dabangg 2 serves primarily as a reminder of what this Rs 100 crore addiction is doing to the art of entertainment. Entertainment, not filmmaking, mind you. Even escapism deserves to be treated with boundless imagination.

And so I'll take Salman Khan stopping a moving tram with nothing but a blazer over the same old Matrix-era maneuvers. Now THAT was quite a kamaal, Pandeyji. 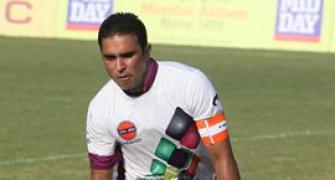 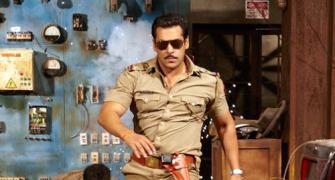 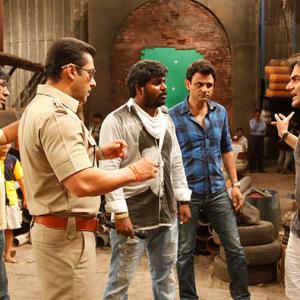 Arbaaz Khan: Salman and I did have regular, normal fights