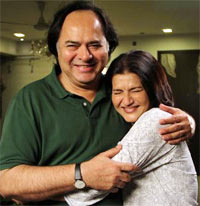 There’s something truly magical about life-affirming themes in films. They are like that comforting hug from a loved one that sees you through a particularly rough day.

With his debut feature film Club 60, director Sanjay Tripathi narrates the story of a 60-something couple reeling in the aftermath of their only son’s death.

Farooque Sheikh’s Tarique is a neurosurgeon, who lives with his gynecologist wife Saira (the breathtaking Sarika) in Pune while their son is in Denver, US, studying business management.

The happy family’s world is turned upside down when their son is killed in a late night shootout at a multiplex (the Aurora killings have been referenced here).

While Saira, who proves to be stronger of the two, provides the shaken Taarique the anchor he needs to cope, Taarique unravels after the tragedy in the most poignant and heart-wrenching ways.

When everything fails, Saira forces Taarique to join a club for people over 60.

Taarique relents following Saira’s moving outburst and is befriended by a group of oddball 60-something men, who are seemingly well-adjusted in their post-retirement life and know a thing or two about having fun.

As the film’s leads, Sheikh -- with is wispy hair and refined diction -- and Sarika -- with the makeup-free gorgeous face, graceful movements and fine acting -- seem to be the only elements of the film that Tripathi has got right about his story.

Sarika’s strong, silent-type Saaira, who is focused more on finding a solution to problems than moping, offsets Sheikh’s depressive and suicidal Taarique, who, at his age and owing to his circumstances, has grown world-weary and plays the perfect grump in social situations.

The film is amply peppered with some standout moments in the troubled couple’s life -- a mother doubting her love for her deceased son when she doesn’t come undone like her husband after the tragedy, a father’s outright refusal to ever cope from the loss.

But that’s where the good parts end.

Raghubir Yadav is not only a very bad choice for the part, he relentlessly overdoes it in the entire film.

His Manubhai, along with his club friends, incessantly checks out young girls, cracks excessively innuendo-laden jokes and recounts stories of their sexual conquests to establish the film’s premise -- that life doesn't end at/after 60, it gets better.

Now, old men can be flirty and have an active imagination when it comes to love and sex, without being creepy, as many of us may remember from the absolutely delightful Basu Chatterjee film Shaukeen starring Ashok Kumar, Utpal Dutt and A K Hangal.

Another common malaise this film suffers from is the glorification of personal tragedy. We all know that the most powerful moments on screen are those that arrive without preamble or extreme dramatisation.

They hit you in waves with a gradually increasing intensity.

Unfortunately, the said moments in this film only involve private moments between the bereaving couple and are exhausted early on in the film.

Club 60 starts off on a promising note but its downward spiral comes faster than one could apprehend.

Now would be a great time to stop referencing old films if filmmakers really want to break new grounds with fresh story ideas.