Review: Flash Of The Titans 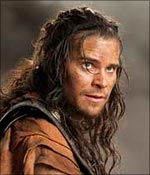 So this is it. The pre-summer offerings from the most influential film producing market in the world are here. And 2010 and is begun with an epic named Clash Of The Titans, a motion picture that purports to tell the tale of a time when gods and men locked themselves in epic battle. Since this is a 'big' movie it is made available to the paying audience in that latest, tastiest of flavours -- 3D.

A prelude tells us of how it came to be that Zeus (Liam Neeson in ridiculous armour that calls to mind old advertising for shiny stainless steel utensils) ruled the heavens, Poseidon took command of the seas and Hades (Ralph Fiennes playing a hairier version of Voldemort) was banished to sulk in the 'underworld'.

From there we are shown a fisherman who discovers a casket in the sea which bears a dead woman and a living, breathing male child. Watching over the rescue of this child is a mysterious woman Io (Gemma Arterton) who narrated that earlier prelude. The boy's name is Perseus and he grows up into possibly the hardest working man in Hollywood these days, a man named Sam Worthington.

When Perseus and his family are witness to the destruction of a statue built in Zeus's honour by human soldiers he also bears first hand witness to the wrath of a god when Hades rises through the sea, takes the form of fearsome flying creatures and kills all the soldiers of Argos who dared defile the image of Zeus. In the ensuing carnage Perseus's adoptive family is also killed.

The King of Argos celebrates the return of a few of his men while his queen goes a step further and declares that her own daughter Andromeda (Alexa Davalos) is no less than a goddess. Needless to say Hades arrives, kills a bunch of soldiers, declares that Argos will fall unless a sacrifice (of the princess) is made to appease the gods. And if the sacrifice is not forthcoming he will unleash the fearsome beast known as the Kraken and destroy Argos. He also notices that Perseus is not killed in the carnage he unleashed before he delivered his dire warning. So who is Perseus? And will he survive his journey to places far and deadly as he looks for a way to defeat the dreaded beast? If the trailers and promotional materials for this movie were to be believed one might be forgiven for assuming that this movie was going to another Dungeons & Dragons or 10,000 BC in its outcome. Fortunately for director Louis Letterier and the producers of this movie, this is not so. 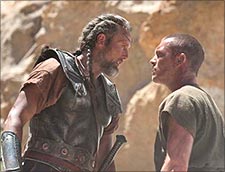 The film is an engaging swords and sandals epic with enough action designed to keep the testosterone bunch glued to their seats. The cast members seem committed to the scenes and dialogues, even when they border on the ridiculous. No major new ground is broken with this film, visually or in the form of narrative but it is still an enjoyable ride. Several legendary figures make their appearance and the movie's DVD might serve as the source for an amusing drinking game called 'spot the legend'.

The film features patchy special effects with imagery ranging from tacky to sublime coexisting in most frames. The most impressive effect is the appearance and disappearance of Hades. In the plumes of spark-riddled smoke that form his wings there is a majesty that really casts him as a scary figure. Conversely, the effect they have chosen to apply to Zeus's heavenly avatar is so laughable it makes one wonder if visually impaired individuals were responsible for such a travesty.

For once, Hollywood may be right. It appears that 3D is the saviour of all things big and blockbustery about modern cinema. At least the novelty of watching big action rendered in that depth-highlighting dimension definitely allows audiences to suspend their disbelief to a greater extent, thereby buying into the antics on screen rather than questioning motivations (and/or behavioural shifts), the sudden surprising absence of gravitational pull on human beings and the straight up ridiculousness of certain outfits and performances.

So should you watch this movie? Yes, if you're in the mood for mindless fun, are not bothered by patchy special effects and are willing to shell out the extra bucks to see this in 3D. Even though this film wasn't authored in 3D, there are enough scenes that benefit from the conversion to the new format. So yes, if you were planning on catching this movie at some point in your life, in 3D on the big screen would be your best bet.