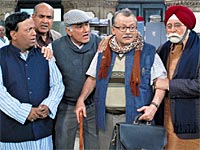 Preeti Arora feels that Chala Mussaddi Office Office has very few funny moments. Post YOUR reviews here!
A few minutes into the film and a raucous argument breaks out between a group of senior citizens entering the hospital. Should they turn left or right? Is there a correct option? What would be faster? Each side has their own arguments. The question remains unanswered. More serious problems take over. But these issues aren't really about the geographical space. They are a metaphor for Mussaddi's options in life. The ones he could have taken but steered clear of. And for all those who succumb to the lure of handing out a petty bribe. Shame!

Based almost entirely, on a decade-old TV series Office Office, Chala Mussaddi is the story of Mussadi Lal Tripathy, a common man, an aam aadmi ,(no we are not talking about the mango people from Love Aaj Kal) the ubiquitous school master. Now retired. Unable to pay the bills at a private hospital. So he's at the mercy of doctors who steal kidneys and filch medicines. Prescribe an unending round of investigations.

But the common man in his reverence for doctors doesn't even suspect foul play. Numbed with grief he sets off for Haridwar on a train. In a second class compartment that he's travelling in, he encounters greed and avarice once again . And on reaching his destination, still more crooks waiting to rip off the naive man.

The crooked and the corrupt spare no one, not even the dead and least of all those who are in mourning. We get the message loud and clear. Like a moralistic school teacher, who religiously advocates each story must have a beginning, a middle and a good-always-wins-over-evil at the end, director Rajiv Mehra goes with this tried and tested formula.

The framework for the struggle has been clearly defined. Now Mussaddi's problems begin in earnest. And he must take the high road. Anything less would be akin to signing his own death warrant.

As Mussaddi meanders his way through the labyrinth of bureaucracy he encounters the swallowing mafia -- Deven Bhojani, Manoj Pahwa, Sanjay Mishra, Hemant Pandey and Asawari Joshi -- the original cast of Office Office.  All talented actors but completely wasted.

Rajiv Mehra probably believes that a fat man wolfing down samosas will have us rolling in our seats with laughter. Or even grabbing a bag of fruit from an innocent passerby. But it doesn't.

Caricatures work on sitcoms, so does slapstick. A full-length film needs well-etched characters who lend depth to the story. And here lies the reason why Chala Mudaassi fails to engage the viewer. Apart from Mussaddi Lal and his son Bunty, the entire cast behaves in an idiotic fashion bordering on lunacy. Mussaddi Lal's interactions with the bureaucracy give an impression of a clown entering a circus ring.

There are a few funny moments in the film like when Asawari Joshi plans to use a pensioner's file to dry her paapads. Or a casual remark about how there is a waitlist even for the train toilets during the rush season. But these moments are too few and far between.

Pankaj Kapur's acting prowess is unquestionable but even he seems to have sleepwalked his way through the entire film. Dialogues delivered in flat monotones must serve to generate laughter, not lull the audience to sleep. His innate ability to make audience laugh even in the most humdrum situations seems to have disappeared.

Gaurav Gupta as Mussaddi Lal's son Bunty is an endearing character. He aspired to own a prosperous business someday. He loves his father but they bicker incessantly. Gaurav is a spontaneous actor and does complete justice to his role.

The climax of the film which has been shot with India Gate as a backdrop is far-fetched enough to be ridiculous. And it stretches endlessly.

We don't doubt the director's noble intentions about exposing the rot which has become an integral part of our system due to corruption. It's his stance of taking the 'high road' we object to. There is a fine line between a political satire and a value education class. Rajiv Mehra and script writer Ashwini Dhir seem to have missed the point on this one.

This film is best avoided. 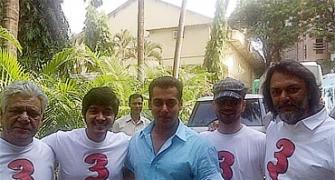 What made Salman take off his shirt? 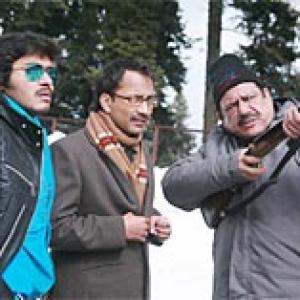