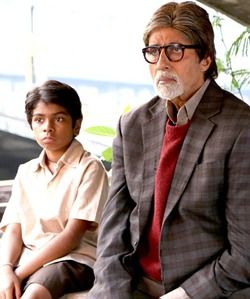 Bhoothnath Returns starts off with a fascinating premise but drags towards the end, says Sukanya Verma.

A conscientious ghost decides to contest elections opposite a criminal candidate and seeks mandate from the gullible public while emphasising on how a worthy candidate shouldn't be judged by the nature of his existence but by his scruples and merit.

A dead man versus a dead conscience -- fascinating premise for satire or spoof, isn't it?

Moreover, with election fever in full swing, Bhoothnath Returns, directed by Nitesh Tiwari, could not have asked for a better timing.

The problem with this well-intentioned social drama is that it starts out as a children's film but decides to grow up mid-way and discard its predecessor's endearing traits to take a sanctimonious stand in a regrettably tedious manner.

Its main attraction then and now -- Amitabh Bachchan reprises his role with humour, wisdom, charisma and a charming approachability he seems to exclusively radiate around his knee-length co-stars.

A fun bond strikes between him and Bhoothnath immediately after the latter returns to earth to wipe out his 'can't scare kids' reputation in Bhoothland, which looks straight out of a European fairy tale on the outside but a typical government headquarters with a couple of witty touches inside –- signboard requesting to maintain 'dead' silence.

With Akhrot's assistance, Bhoothnath redeems some of his lost glory.

In exchange, he helps the impoverished Akhrot to make some money by ethically emptying out spooked under-construction buildings. Implausible as it is, the next half an hour of Bhoothnath Returns concerns itself with just that.

What could be a fine opportunity to dispense a series of goofy gimmicks and appease the kids in the audience is surprisingly snubbed to accommodate excessive sentimentality.

All this criticism is put on hold after Boman Irani promisingly enters the scene to provide Bhoothnath Returns its crooked antagonist against whom our titular ghoul decides to stand in the upcoming elections.

How Bhoothnath gets a ticket to contest his underdog campaign featuring Akhrot, a bunch of slum folks and his lawyer (portrayed with flawless comic timing by Sanjay Mishra) is far more enjoyable than what follows afterwards.

Adapting a socially relevant context and well-meaning theme is commendable but confusing, when coming from a brand associated with a children's fantasy.

Even if I overlook genre conflicts, Bhoothnath Returns doesn't really make a strong case of what it's trying to convey -- the importance of voting wisely (something a Satyamev Jayate episode does better with facts, figures and realism) by muddling profound idealism around incoherent, ambiguous ideas treated with embarrassing simplicity.

Like I mentioned earlier on, a dead mortal taking on a dead morality is a fascinating concept that could blossom beautifully under someone like Rajkumar Hirani's story-telling aesthetics.

But Tiwari's script and filmmaking lacks the insight, sarcasm or resolution to make an incisive commentary on the business of politics.

Whatever connect the towering Bachchan makes with his viewer is rudely disrupted to accommodate mediocre songs or misplaced sentimentalism in a prolonged slide show of poignant portraits making Bhoothnath's return quite a drag in the end.