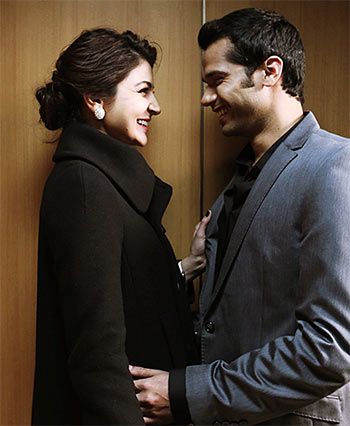 Anushka Sharma is at her most impressive in the chilling NH10 but the climax is a bit of a letdown, notes Sukanya Verma.

Night seems to transform Gurgaon’s claustrophobic traffic into a magical bokeh of glimmering signal lights where aloof skyscrapers line up to embrace.

For a long time the camera reports this urban scenery, forming the evocative view of a car window, against the tête-à-tête between a husband and wife driving to a friend’s bash.

We don’t see their faces immediately -- only giggling, whispered exchanges from a strictly private conversation.

But as night grows older, it gets dark.

Navdeep Singh’s NH10 ventures into an unsafe, unsettling space where shock quickly changes into survival and the brutality of a world you dreaded about from the fringes punches you right in the face.

Singh took Chinatown’s template to Rajasthan and moulded it as Manorama Six Feet Under.

In NH10, he borrows the basic framework of Eden Lake and sets it in Haryana. He does a nifty job of it too until the problematic third act.

NH10 does what a good thriller ought to, without wasting a single second.

He gets us acquainted with Meera (Anushka Sharma) and Arjun (Neil Bhoopalam is affable but doesn’t look short-tempered enough for the part) -- well off, working professionals married to one another, people we are supposed to invest in right at the onset.

They exude charm, humour and familiarity; you wouldn’t want a fly to hurt such nice folks.

Ten minutes in the movie, Meera’s attacked by a bunch of hoodlums while driving back alone from a late-night party but narrowly escapes owing to her presence of mind.

It’s terrifying how easy it is to believe the authenticity of this scene.

As is the rudeness of the security guard who makes life hell if one holds a no-parking space for a second extra longer than his patience.

Singh also unflinchingly observes the disturbing misogyny that prevails in North of India as well as the game of genders but expresses it better when not forcefully creating moments to highlight it.

Like the scene where Meera’s colleague randomly remarks on how women have it easy following a presentation gone well.

But he scores in the subtlety with which he conveys Meera’s disappointment and Arjun’s guilt over the afore-mentioned mishap.

A change of scene beckons.

Arjun and Meera head out for a getaway trip to celebrate the latter’s birthday.

If you’ve seen a bleeding, blasting Anushka on the poster of NH10 with a tagline that reads ‘No Turning Back,’ you know it doesn’t end in a picnic.

Navdeep Singh’s build-up to the horror is striking and, more importantly, chilling.

A stranger taps on the windscreen and the camera zooms above the text of the passenger side-mirror -- “Objects in mirror are closer than they appear” even as the car moves away from his ominous figure.

A Turkish nazar charm dangles furiously as if to warn the travellers of the danger lurking ahead.

Even an innocuous cup of chai covered with wrinkled malai on its surface smacks of toxic air.

Eventually a violent fight involving honour killing drags the duo unwittingly into it. What makes it frightening is the plausibility, the commonness of such extreme ideology and the social acceptance of this savage lifestyle.

Things get awry and hopeless.

Meera is forced to fight to escape, to rescue, to survive and to retaliate. And Anushka Sharma confronts the worst day of Meera’s existence with steely nerves and throbbing intensity.

It’s a role that expects her to constantly change emotional pace and strategy but co-producer Anushka delivers it with a veteran’s accuracy.

An underwhelming climax, sadly, dilutes the triumphs of the stark thriller.

This compulsive need for a last word kills the impact of many a strong, better-off-silent scenes in Hindi films.

There is a standalone interesting moment between Anushka and Darshan Kumar (quite a range from Mary Kom to NH10, I’d love to see more of this guy) as she lights up a smoke and observes him struggle in a body language that’s uncannily Bachchan.

But in context of the film, it just doesn’t sync.

What ultimately matters is NH10, even in its inspired form, is a reality we both live and deny.

Are men the protectors? Can women protect themselves? Are men the enemy? Are women the enemy? Will we ever get past caste, creed and gender? Are cities worse or villages? Is India too convoluted? Is anyone safe?