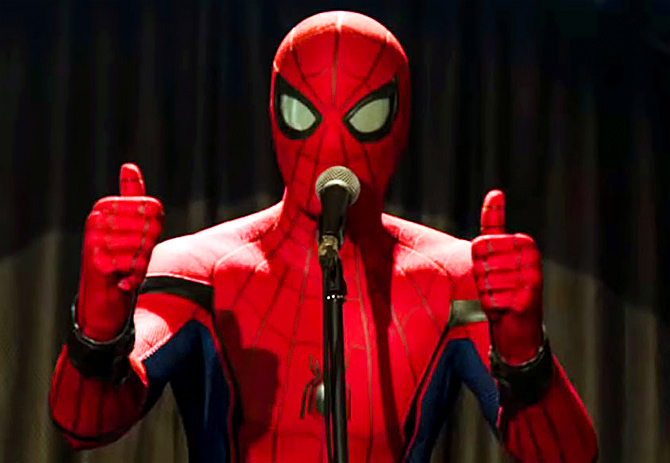 We asked YOU to send us your reviews of Spider-Man: Far From Home, and we weren't disappointed!

1. Achingly young and grounded Tom Holland cementing his position as the best Spider-Man among all the makdi-men to grace the big screen.

2. Peter Parker missing his larger-than-life mentor, being surrounded by one too many kind/ well-meaning/ tough-love dispensing/ laden with agendas new mentors but still managing to be a polite, quietly grieving, yet likable and endearing teenager.

3. Zendaya continuing her epic run as a refreshingly off-beat MJ who is just as sharp-tongued, correctly opinionated but kind as always.

4. Ned, Tom’s best friend and fledgling “MAN” embarking on the path of love and all that it entails.

5. Jake Gyllenhaal being a potent bag of tricks as the seemingly vanilla-bland superhero, Quentin Bleck/ Mysterio.

6. Aunt May still being gorgeous, feisty and lovable as always.

7. A bereaved Happy Hogan trying to come to terms with the loss of his boss/best friend while working with (NOT FOR) Spider-Man and having heart-wrenching moments of nostalgia as he watches Peter unknowingly mirror Tony’s signature moves and quirks.

8. A long-suffering, reliably badass Nick Fury who cannot believe that he, Nick Fury, is being ghosted by a mere teenager. The audacity...

7. One mind-bending, dizzyingly spell-binding illusion sequence post-interval. You will feel yourself gasping for air while being effectively pumped with adrenaline as the swoops, twists, turns, falls and peaks play across the screen. So much paisa-vasool, I tell you.

In conclusion, Spider-Man: Far From Home picks up the frayed web post-Endgame with a touch of cheesiness, oodles of grace, great dashes of humour, lots of national architecture demolishing action shots, the aw-gee-shucks pitter-patter of fledgling love, a fresh and more realistic villain and a good, earnest superhero at its helm who in his own good, earnest manner will make Tony Stark proud and us, as fans, applaud his actions with quiet appreciation.

P.S. Do NOT miss the mid-credits scene.

And yes, we have a post-credit scene too.

Also... Stan Lee, You were missed.

This story was written by the famous legend Stan Lee.

The story is very different from Homecoming as it is emotional and a science fiction movie.

The movie has fond references of Tony Stark, who died recently in Avengers Endgame.

This movie is very funny and has many twists and turns.

It's about Peter who goes on a science trip to Europe with his classmates and his best friend Ned.

Among his classmates are Flash, the bully, Brad Davis, his rival and MJ, his romantic interest.

I have visited Europe with my family and traveled through countries like France, Italy, Vatican City, Andorra, Spain and Switzerland. Watching this movie brought fond memories.

Peter, in this movie, wants to have a normal life and has a plan to confess his love to MJ on the Eiffel Tower but his plans get ruined when Nick Fury tells him about the menace people were about to face in the near future.

The Europe trips begins at Venice, where Peter is tricked by Mysterio (Quentin Beck), his teammate, who claimed that he was from a different Earth.

Peter gets trapped in his deceit and gives away Tony Stark's special gift which was meant for him. He later realizes his grave mistake and tries to get it back.

With the help of his friend Happy, he saves his friends from the dangers of Mysterio.

He feels elevated after defeating him but there is still another twist in the movie, which I will not reveal here.

I liked this movie because of the climax and twists.

he director has depicted the concept of science fiction beautifully and there is a lot of comedy (Like Spidey getting referred as Night Monkey!).

At some instances, there are some emotional scenes of Iron Man.

The concept of the movie -- of getting tricked by the villain -- could have been better.

I wish the movie had a longer running time and included more action and imagination.

Tom Holland is young, budding actor who is best known for starring as Spider-Man in Marvel movies. He portrays Peter Parker as an innocent, adventurous and romantic person.

I look forward for his next movie with lot of expectation.

I rate this film four out of five stars.

Spider-Man: Far From Home is the perfect Spidy movie with elements of the popular Marvel Cinematic Universe cleverly added to it.

This movie is a nice amalgamation of teenage romance and superhero stuff.

Spider-Man not only fights a new nemesis, gets to work with a confused Nick Fury and gets new suits but also has to deal with the loss of his mentor Tony Stark.

Director John Watts and writers Chris McKenna and Erik Sommers not only showcase the superhero but also give him enough time to show off the goofy Peter Parker.

Parker's relationship with his best friend Ned (played excellently by Jacob Batalon) and Aunt May (played by the beautiful Marisa Tomei) is the best thing of the movie. It results in hilarious situations as well as cute moments.

Holland's chemistry with Zendaya is also very good, as this film marks the beginning of a cute love story between MJ and Peter Parker.

Parker gets a new mentor in the mysterious Mysterio, played by the scene-stealing Jake Gyllenhaal.

The writers do well in connecting the famous Spidy villain with the MCU lore as well as justifying his comic book backstory of being a master illusionist. Gyllenhaal has fun playing the character and is simply brilliant.

The film also showcases how the world is recovering from the snap.

The people are shown calling the 'five year snap' period as a blip. They cleverly include many of the important characters of this movie as victims of blip, so that there is no age gap with Parker.

Of course, Ironman's memory is a huge part of this film's narrative with almost every major character cleverly linked to him.

The world is shown as a scared place post the snap without the Avengers looking at Spidy to become the new Avenger.

The action scenes are extremely well choreographed, especially the fight with the fire elemental and the climax fight.

The background score by Michael Giacchino is brilliant.

Tom Holland is a phenomenal actor and the best actor who ever played Spidy.

He showcases the goofiness, innocence as well as bravery of Peter Parker aka Spiderman with aplomb.

The supporting cast, including Samuel Jackson, Jon Favreau and Cobie Smulders, are too good.

But it is sad to see a competent actor like Tony Revolori relegated to a small role.

The mid credit scene brings back a favourite fan character from the previous Spider-Man movies but also shocks everyone with a huge reveal which could change the Spider-Man lore as we have seen in the movies.

The end credits scene is a nice nod to secret wars as well as the space version of SHIELD, SWORD.

Spider-Man: Far from home is a good Spider-Man movie and is on par with the best Spidy movie ever: Spider-Man 2.

It is a good follow up to Avengers Endgame and marks the start of a new Avengers team, led by the friendly neighborhood Spider-Man.

I rate this film three and a half stars out of five.

After you watch Spider-Man: Far From Home, please send your review to moviesdesk@rediff.co.in (Subject: My Spidey Review) along with your NAME, AGE, LOCATION.