ith frightening promos on air for weeks and posters of the film plastered all over Mumbai, Rakht seems to carry a buzz.

Drishti (Bipasha) is a tarot card reader, who has a number of clients. One of them is Riya (Neha), an abused wife. Riya tries to seek reassurances from Drishti that her marriage will be all right, but Drishti tries to convince her otherwise. When she tells Riya to leave her husband Sunny (Dino), Sunny starts threatening Drishti.

Soon, Drishti is introduced to Natasha (Amrita), who is her son's school principal Rahul (Sanjay)'s fiancée. But at a party, Drishti finds Natasha in a torrid embrace with Abhigyan Sharma (Himanshu Malik).

A few days later, Natasha goes missing. When the police are unable to solve the case, Rahul asks Drishti to intervene.

How is Sunny's story related to her?

Where does Mohit (Suniel Shetty) fit in?

Will Drishti find the missing pieces of the puzzle?

With a meandering first half, the pace picks up in the second half, as viewers wonder where Natasha's fate lies.

Why directors, when directing horror films, need to resort to sound effects patented by the Ramseys beats me. Bipasha's door opens and shut fine. But when it gets vandalised, it produces the age old creaking noises, straight out of Ramsey films.

The film chills only in parts. There is the predictable blood dripping from the tap and water overflowing from a bathtub. 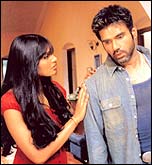 Suniel as Mohit has done a good job. Dino, as the abusive husband is very good especially when he threatens Bipasha at her home.

Bipasha and Neha are competent. Sanjay is his usual deadpan till the climax.

Amrita looks the hottest among the women. And though Abhishek Bachchan has only a tiny cameo in the film, he is charming.

The film is unnecessarily violent, especially the scene when Mohit avenges the wrongs done to him by his dad.

That said, Rakht is a well made film, with its share of scary moments and good item numbers.