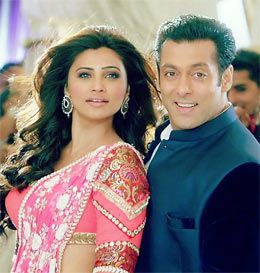 Salman Khan does his thing like only he can in Jai Ho. And the crowd responds. Raja Sen shows us, in his review.

Like with Alok Nath jokes, it all began with Maine Pyar Kiya.

That Sooraj Barjatya hit had characters (with 'friend' written on their baseball caps) moronically state that friends don’t thank each other or apologise, a preposterous declaration which must have led the next generations into an era of boorish dickishness in the name of dosti.

Not much has changed 25 years later as Salman Khan, in his latest film -- an uncredited and inexplicably violent take on Pay It Forward -- starts telling people not to say thanks, but instead help three people in need, and tell them to help three other people, and so on. (In the film, this leads to Salman passionately drawing stick figures while people stand around him, cheering as they help him multiply numbers by three. Um, yeah.)

Sohail Khan, Bhai’s bhai and the director of Jai Ho, obviously likes the idea and extends this welfare policy charitably towards familiar but out-of-work actors, thus negating the need for extras.

Everyone from the rickshaw-wallah (Mahesh Manjrekar) to Nameless Corrupt Cop No 2 (Sharad Kapoor) is a recognisable face; even the neighbourhood drunk is 'Khopdi' from Nukkad.

In the middle of this world stands Salman Khan, playing himself.

Khan, Bollywood’s real-life answer to Derek Zoolander, does his thing like only he can. And the crowd responds.

Sitting in a single-screen theatre, the air was filled with shrill, thrilled whistles as soon as the censor certificate hit the screen. The first glimpse of Khan -- via braceleted wrist -- had the crowd in paroxysms.

Imagine a movie theatre full of 14-year-old girls getting their first glimpse of Michael Jackson (Or McCartney. Or Bieber. Pick a generation) except with grown men shrieking instead of preteen girls. (During the climactic fight sequence, these men raucously yelled 'kapda utaar', breathlessly exhorting their bhai to peel off his shirt and make their day. It’s more blatantly than any of our leading ladies get objectified, that’s for sure.)

A little girl needs to go to the restroom; Salman helps.

You get where this film is going, yes?

In his own lunkheaded manner, perhaps this very choice of film is Salman being sensitive. Perhaps he feels that people watching his film will go out and help other people... But to what end? Despite the hamfisted direction (at one point Suniel Shetty shows up on a highway and starts shooting people with a goddamned tank), the film’s main problem is that Jai Ho isn’t about being a samaritan or paying it forward; it’s about a man who can smash the system all by himself. Not entirely relatable, nope.

Meanwhile, amid the sea of familiar faces peeks the new girl, Daisy Shah. She makes her way onto the screen doing pseudo-Indian classical dance steps while wearing cowboy boots. She’s trying really hard to be MTV but is only applauded, rather disturbingly, by middle-aged folks while the kids watching don’t seem to care.

After some silly bickering -- and a ghastly recurring joke about her innerwear -- Salman falls for her, but it isn’t as if she matters. There are too many characters, you see, to create and set-up and conveniently resolve, and mercifully a lot more screen-time is given to the lady who plays Salman’s sister. Tabu’s still got it, and as evidenced by the seetis from my neighbours, when she did a brief jig, she can still rock it hard.

The one thing that left me truly touched, however? The fact that Sohail Khan took forward that lament from Austin Powers, that “people never think how things affect the family of a henchman” and showed a goon, who had been beaten up watching TV with his family and lamenting his actions. It's... It’s hard to make up, really.

As for Khan, there’s nothing new to see here.

But that’s probably the point.

For a man who’s pushing 50, he’s looking spry and seems to be having fun playing to type, though the absurd amounts of money his movies rake in obviously help.

Having said that, my one and only laugh in Jai Ho came when Khan punched a car window and -- in a film where he throws people through all manner of doors and walls and vehicles -- explained himself saying he didn’t know it had been rolled up. Does he really want to be in on the joke now? Or maybe he already is.