'I don't remember the last time I was this invested in the characters of a story since Doordarshan's golden age or early days of cable television boom,' applauds Sukanya Verma. 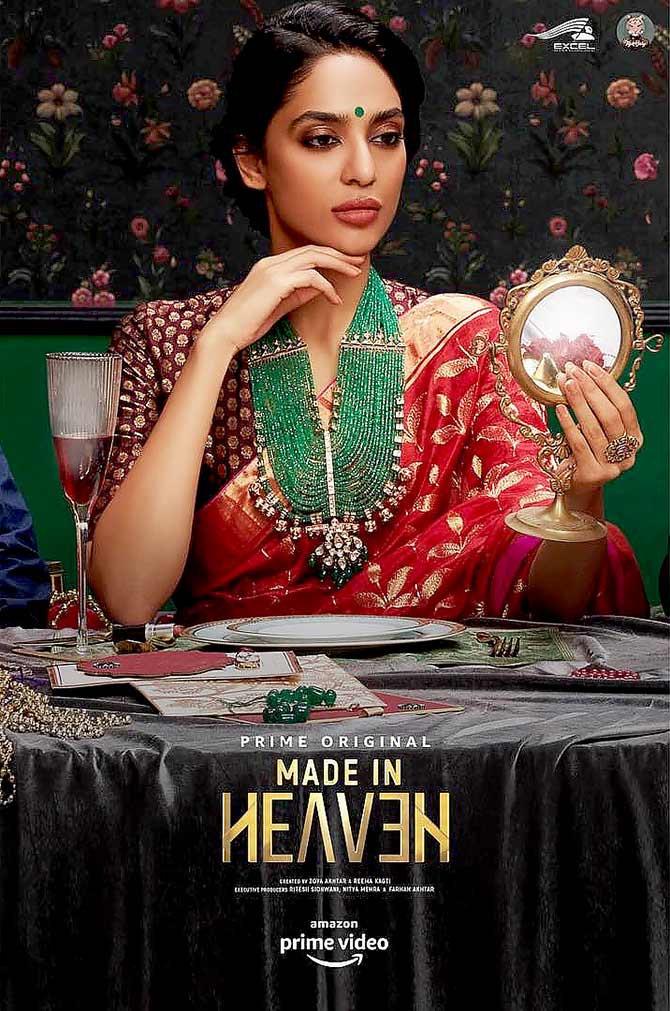 At the end of Made in Heaven's first episode, we notice the bride and groom in all their resplendent glory uniting in holy matrimony, family members overcome by emotion, the dazzling details of Sabyasachi's intricately embroidered lehenga and the shimmering, sublime vibe of an extraordinarily perfect moment.

The entire picture is so deceptively beautiful, it overshadows all the doubts and disruptions preceding it.

Except the chaos surrounding a big fat Indian wedding is neither a myth nor exaggerated.

Treated as an all-you-can-spend event among the super affluent, it's the ultimate parade of a personal moment designed to produce Instagram worthy pictures for a lifetime. But the course of a dream wedding never did run smooth.

Made in Heaven Creators Zoya Akhtar and Reema Kagti dive into its madness and magnificence to put together nine engrossing episodes on Amazon Prime.

Every single episode, directed in turns by Akhtar, Alankrita Shrivastav, Prashant Nair and Nitya Mehra, has something pertinent to say about the staggering hypocrisies of Delhi's upper crust conforming to regressive rituals and fuddy-duddy beliefs.

Wealthy isn't the same as wise.

Only there's more to Made in Heaven than meets the eye.

Its mocking title is also the name of the wedding planning company spearheaded by Tara Khanna (Sobhita Dhulipala) and Karan Mehra (Arjun Mathur).

It's a young concern coming into its own in a market monopolised by the predictable opulence of their biggest rival, Harmony.

Like a classic detective series, every episode brings a new case that demands their undivided attention and problem solving skills while their personal lives untangle on the side or, sometimes, right through it.

Tara and Karan's challenging journey -- professional and personal, glimpses of their past colliding with their present -- are the heart of Made in Heaven.

Tara is a social climber who married her way into money. But not once does Made in Heaven judge her for it.

The show doesn't have a single judgemental bone in its body, not towards people who wish to rise above their circumstances anyway.

Her husband is a polished tycoon (Jim Sarbh) cheating her with her best friend (Kalki Koechlin).

As clichéd the ploy is, we don't hate them either. Perhaps it has to do with Kalki owning up to her guilt before her serene shrink, Sarbh's gentle impulses or the warm comfort they find in each other. 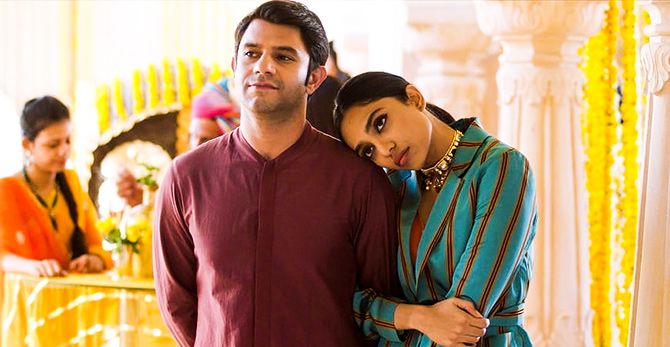 Karan is homosexual. His fight for sexual identity, respectability and acceptance is one of the most heartrending arcs in the series. And the masterful actor that he is, Arjun Mathur makes us feel his indignation, fortitude and goodness in equal measure.

One could not have hoped for a better portrayal of the terribly caricatured or misrepresented LGBTQ community.

Sobhita complements him at every step.

There's something trustworthy about her soulful face and anxious eyes that makes people, even the screen, open up to her.

The degree of intimacy her vulnerability provides takes Made in Heaven another few notches above.

The behind-the-scenes action of constructing a fancy wedding bring into focus work ethics and economics, quickie office meetings, everyday concerns of a production team, the camaraderie between colleagues, anxiety of an underpaid staff, the image building exercises and, most of all, an aptitude for quick fixing.

It is what grounds Made in Heaven and allows it to be more than an excuse to burst into an ostentatious art design.

Though it does a fine job of the latter too; the weddings are pretty much a breathtaking catalogue of versatile elegance and aesthetics.

As are the problems thrown before Tara and Karan.

A bride choosing contest in Ludhiana, a political alliance turned into a match, a bride-to-be's one night stand with the superstar performing at her wedding, a molestation complaint from the mehendiwali, a last-minute dowry demand, second marriages and senior citizens, marry the tree, heartbreaks and happy endings -- the duo has its hands full.

Where most would be tempted to write Tara and Karan as a romantic deal along the lines of Band Baaja Baarat's Bittoo and Shruti, Akhtar and Kagti resist any such urge to mix business and pleasure.

How refreshing that is.

Tara and Karan's tuning is effortless and offers a rare glimpse into deep platonic affection.

Made in Heaven's sex scenes -- both hetero and homosexual -- are equally authentic in their ardour.

A hint of flirtation is reserved for Made in Heaven employees -- Shashank Arora's prying cameraman and Shivani Raghuvanshi's bourgeois aspirations.

The latter's naiveté and blunders help broaden Made in Heaven's premise beyond its elite focus. Although I highly doubt anyone would be hired back after being fired for misusing the company credit card.

I also didn't think much of Arora's often sermonising, patronising voiceover spelling out everything like the punchline of a think piece in an otherwise subtle show. Half expected him to sign off with xoxo (hugs and kisses) in the vein of Gossip Girls whose sartorial abundance is echoed in Made in Heaven.

But these are minor flaws in a show that is easy to binge on.

I don't remember the last time I was this invested in the characters of a story since Doordarshan's golden age or early days of cable television boom.

Made in Heaven may be aimed at the small screen, but it is built in big-screen ambition.

The production values are lush, the writing is astute (How arranged is this marriage?) and the soundtrack is an absolute delight.

The not-so-starry turns -- the resourceful jasoos, the diligent lawyer or the cool-as-cucumber shrink -- are no less impactful.

Whether weddings are vulgar celebrations to declare a pair's togetherness to the world or striking camouflages to conceal the cruelty of calculated alliances, it all comes down to 'nipping the manglik thing in the bud.'

Akhtar-Kagti's deliciously detailed, humorous and empathetic look at flaws and fancies, cynicism and spunk, colour and chaos, prejudices and revolutions is a satisfying watch with tremendous repeat value.