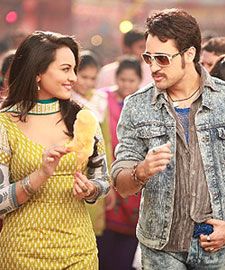 Pritam's music in Once Upon A Time In Mumbaai Dobara are good enough to be played on loop, writes Joginder Tuteja.

Songs of the 2010 hit Once Upon A Time In Mumbaai like Pee Loon and Tum Jo Aaye -- composed by Pritam -- are popular even today.

Now, he returns with the film's sequel, Once Upon A Time In Mumbaai Dobara, with Rajat Aroraa (the film's writer) as the lyricist, and expectations are manifold.

More so, since films featuring Akshay Kumar and directed by Milan Luthria have time and again boasted of some chartbuster songs.

And the music for the sequel does not disappoint either.

Ye Tune Kya Kiya is a well-tuned qawalli, where Pritam shows us what he is capable of. Rajat Aroraa's lurics are terrific, his words are rooted to the core and Pritam's composition further ensures that the essence of a quintessential 'qawalli' is maintained right through it's five minute duration. What adds authenticity are Javed Bashir's vocals that gel well with the overall flow of the song. A winner.

What is not a winner though is the re-creation of Tayyab Ali (by Anupam Amod) from Amar Akbar Anthony.

Appearing as a forced composition to suit the 1980s milieu, what with English lyrics being placed intermittently (with 'how how', 'bow bow' added to annoying effect), this one could well have worked had it been retained as-is

instead of being worked upon. After all, the tune is catchy, the song was a huge hit back then in the 1970s and the rhythm is in place as well. However, new lyrics coupled with experimentation doesn't really work, even as Javed Ali tries to do his best as a singer.

Tu Hi Khwahish is a better retro song, which sets the mood back in the right place. When Sunidhi Chauhan has her heart in there for a song, especially when it comes to an item number, she hits at six. After Parda (OUATIM), Pritam comes up with a killer song yet again, and would well make Asha Bhosle proud, especially during the 'antara' portions.

In this short album, the finale comes with Chugliyaan, a Sufi number. Javed Ali reminds one of Sonu Nigam in the way he renders this one behind the mike and one has to admit that he does exceedingly well. A beautiful love song with a poetic feel to it, Chugliyan is also special due to an impressive chorus and Sahir Ali Bagga's vocals in the background.

Ye Tune Kya Kya and Tu Hi Khwahish are instant winners in the making. If we ignore Tayyab Ali, the rest are good enough to be played on loop.