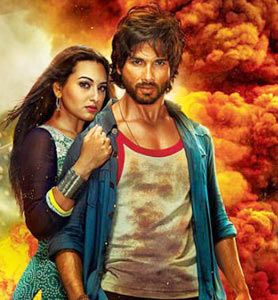 One had expectations from the music of R... Rajkumar. Not classy or path breaking, but something with a mass appeal that comes with the Prabhu Deva territory.

What one gets in the opening number -- Gandi baat written by Anupam Amod, is a quintessentially Southern sound.

It’s a rowdy number that reminds one of the Bappi Lahiri variety of music composed for many a Jeetendra, Mithun Chakraborty and Govinda starrer.

Gandi baat is sung by Mika Singh who is accompanied by Kalpana Patowary.

Saree Ke Fall Sa strikes as an innovative metaphor for the matters of the heart and is another fun song in this album.

Yet another number with a hardcore South feel to it, it has Nakash Aziz behind the mike with Antara Mitra (who sang in an altogether different mode in Pritam's Bheegi si from Raajneeti). As a remix version follows, that could well make it a hit with DJs.

The ever-reliable Arijit Singh is roped in for Dhokhadhadi,

a love song, which follows Pritam's formula for getting a core Indian melodious song out with some good arrangements.

In fact it is surprising that this Nilesh Mitra-written song is not yet out for promotion as it lends a different flavour to the soundtrack, what with Palak Munchhal doing well along with Arijit in this duet.

A fast paced number sung by Kunal Ganjawala, Mat Maari seems straight out of Jeetendra-Jaya Pradha-Sridevi outings from the 1980s.

The album concludes with Kaddu katega, a song best relegated to the end. With lyrics by Ashish Pandit, this one has Antara Mitra going solo behind the mike.

Though the tune is quite fast-paced, the 1960s style number doesn't really come across as inspired even though Antara tries her best.

All hopes for this item number depend on how well it is shot since it doesn't really cut it as a standalone number.

R... Rajkumar starts off well with Gandi baat and Saree ke fall sa but there is an overdose of this sound, and a couple of ordinary numbers dilute the effort to some extent.

One now looks forward to the way the songs are picturised in the film so that they help in the overall narrative. 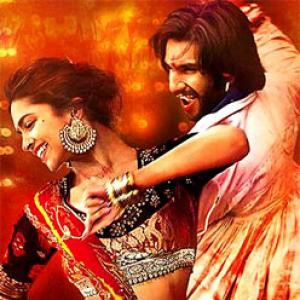