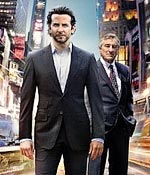 Snazzily-shot with some nice reality-defying visual effects, Limitless lives up to its title in that department. In its narrative, however, this Neil Burger adaption of the book The Dark Fields is quite plain vanilla until it reaches the twist-in-the-end finale.

The title alludes to the limitless capacity of our brain to record data and remember it with time. If substance abuse helps one store minutest of memories, why not?

Well, that seems to be the credo of Eddie (Bradley Cooper), a writer with a rather pitifully-developing plot of his own. When we are introduced to him, in a first-person narrative, nothing's going right for him. He just can't finish a novel and is running against an impossible deadline to do so. On the way down the street, he bumps into his ex-brother-in-law who slips him in a pill, an experimental brain-enhancement drug.

The pills do new-found wonders to his life. He types the novel out of his way within four days, learns new languages in minutes and masters the intricacies of stock-trading so quick that it would make Warren Buffet re-think his strategy. In time, he's hired by moneybags, Carl Von Loon (Robert De Niro) resulting in Eddie's overnight rise in social and financial status.

However, with excessive usage of the drug, he becomes unconsciously addictive. When he realises he runs the risk of exhausting the pills and that there are others who could kill for it, he has no option but to save whatever remaining tablets that are left.

The film is entertaining in parts, is fast-paced and cuts straight to the point but in doing so, it loses out in suspense and drama. The rapidly-shifting stands, the involvement of Russian gangsters and most importantly, the insipidly-written part of De Niro which could have become a backbone makes Limitless just another moderately-likeable film.

It wouldn't be wrong to say that De Niro is wasted; he cuts a not-so-impressive figure as he squints and smiles. Clearly, the great actor is not at fault. His character, that of a business tycoon, could have been something if the writer had fleshed him out carefully and not carelessly.

Of all, Bradley Cooper leads from the front, dominating every frame of Limitless. It won't be a crucial role of his career, he knows it and so do the viewers. One can, perhaps, say the same thing about the film. That it limits itself in trying to be limitless. 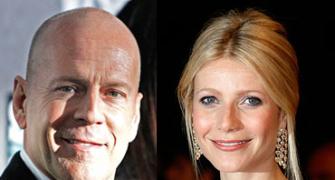 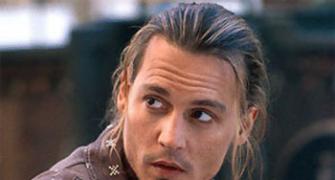 Sandra Bullock wins an Oscar, and a Razzie!