Jab Harry Met Sejal Review: SRK rocks, nothing else does 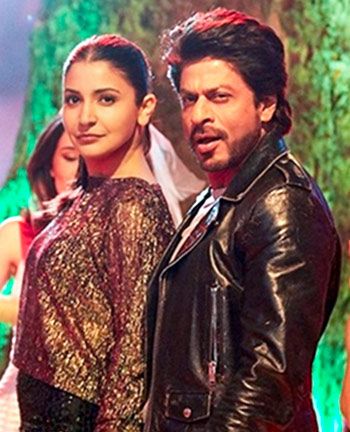 Jab Harry Met Sejal has the stars, the songs, the scenery and everything you'd imagine in a love story.
But in the absence of soul, none of it really matters, feels Sukanya Verma.

What may seem like a trademark is really a breakthrough -- discovery is the key to evolution that makes most headway in a fluid surrounding.

In figuring out another, we figure ourselves.

Imtiaz Ali hasn't gotten to the bottom of it yet, but his story's journey within a film and outside it is about just that.

It's my favourite characteristic of his filmmaking and nowhere to be found in Imtiaz's latest confection, Jab Harry Met Sejal wherein the journey neither delivers the zest of an adventure nor the wisdom of an exploration.

It's like its two leads are merely ticking off an itinerary that's beautiful to witness but in the absence of soul bears little magic.

Jab Harry Met Sejal has the stars, the songs, the scenery and all the trimmings for a riveting romance.

Harinder Singh Nehra aka Harry (Shah Rukh Khan) is a Punjabi tour guide in Europe reluctantly assisting Sejal Zaveri (a Gujarati traveller from a group tour he recently conducted) to search for her missing engagement ring.

Come to think of it, Jab JMD (Jai Mata Di) Met JSK (Jai Shree Krishna) would be an apt title for it.

The film opens on a sublime note with Safar, the sweetest melody from Pritam's mellifluous soundtrack highlighting Harry's humdrum, empty life until we meet Sejal.

We never get to see the extent of Harry and Sejal's interaction before she charges back into his life and nearly blackmails him to help.

Her family isn't allowed much of a presence either, typical of an Imtiaz creation, where potential lovers are seldom interrupted by familial obligations.

If Love Aaj Kal harped about the concept of 'pile on,' Sejal demonstrates it in all her grating glory.

Clearly the brief was 'annoying Gujju' and Anushka puts her heart into it. It's not necessarily a criticism. I know people who sound just like her, so her accent is almost authentic if also inconsistent.

The best thing about cinema is its power of plausibility.

It's what makes good look great and even the unlikable alluring, but in JHMS, Anushka's spectacular energy and whims are spent playing a doltish damsel-in-distress obsessed with making bizarre inquiries about her sex appeal.

Sejal's bouts of low self-esteem targeted at Harry, a guy she barely knows and already trusts implicitly, are perplexing. All her yak yak candour and not-so-jolly LLB-ness proves too much even for Harry, Europe's resident lothario, who at one point protests, 'Yeh bahut silly ho raha hai.'

Paying no heed to Harry's growing exasperation, she continues her antics as though possessed by Johnny Lever and proposes to behave like his girlfriend till the end of their trip.

It's not long before homesick Harry, dreaming of Punjab and phulkari, settles to sing early morning duets about Radha against a bird's eye view of Prague.

Amsterdam, Budapest, Frankfurt, Lisbon, Frankfurt are some other European towns they paint red. I don't mind the revelry; I just wasn't invested in it.

Not once, not ever.

Imtiaz's derivative imagery draws influences from Dil Hai Ki Manta Nahin and Dilwale Dulhania Le Jayenge most unabashedly AND unimpressively to orchestrate what happens when role playing gets real, a street-smart guy rescues a dewy-eyed girl from NRI wolves and where a man and a woman will snuggle in sleep but won't cross the line because once a Raj Malhotra always a Raj Malhotra.

There's a scene where Sejal asks Harry if he'll attend her wedding in Mumbai.

'You don't know me,' he tells her with a hint of sarcasm that I read as 'you wouldn't ask such silly questions if you had seen DDLJ.'

Or when Harry brings out his forceful Punju voice in the middle of nightclub row like a daddy losing his head at a rebellious teen -- 'Kutta bhauk raha hai?'

These are times when JHMS's wit is at its unaffected best. But such moments of ingenuity are few and far between.

In essence, Jab Harry Met Sejal's titular characters wander aimlessly from one place to another from inside a bubble, holding on to a dream that's playful yet unreal, surprising but hollow.

Had Imtiaz treated it like one and not surrendered to predictable fantasy, I'd still admire his audacity.

What's commendable though is how even after so many years SRK makes falling in love with a woman about to marry someone else look like it's happening to him for the first time.

Truth is he's no longer practising romance. He has become it.

And so it's only befitting when Sejal begs him in her best fangirl face to train her fiancé in the art of affection -- 'Meri life ban jayegi.'

I only wish it's for a better love story.