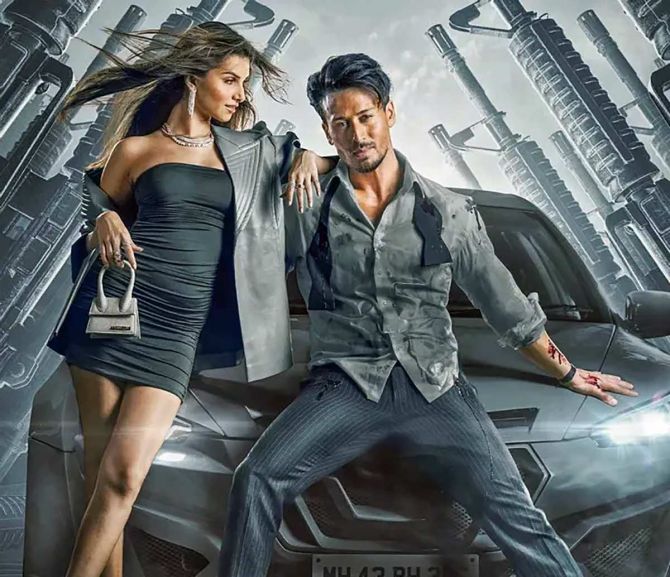 Ever wondered how it feels to be inside a washing machine? I regrettably found out while watching Heropanti 2, which treats your brain like laundry and subjects it through all the stages of a washing machine cycle -- soak, wash, rinse and spin.

Dho daala, as they say in Bollywood masala speak.

Full of clobbering noises and imbecilic impulses, the second Heropanti movie in the Sajid Nadiadwala franchise, also credited for its story, is a perfect example of what happens when moviemaking becomes a producer's toy.

Directed by choreographer turned film-maker Ahmed Khan, behind previous Tiger Shroff poppycocks like Baaghi 2 and Baaghi 3, is a two-hours something excuse for stars to jump between exploding cars, flying beefcakes and showy dance numbers designed to highlight Tiger's six-pack, Tara Sutaria's wardrobe and Nawazuddin Siddiqui's ability to enjoy himself in Bollywood bilge.

Scattered all over the globe -- England, India, Russia, China -- Heropanti 2's plot can be described in three characters -- a magician, a hacker and a Barbie. Their characterisation can be summed up in three adjectives -- queer, muscular and dimwit.

Among its many wastages include Amrita Singh's ebullience in a praying, pilgrimage-hopping mommy role, Chellam Sir fame Uday Mahesh in a nondescript computer jock, and worst of all, A R Rahman's calibre dumbed down to compose and croon innuendoes like Dafa Kar.

One of its Sufi-themed melodies sounds like a clear request from the film-makers to recycle Rockstar's Kun Faya. It's not the first time Rahman has come to Ahmed Khan's rescue though. Remember Lakeer? But even the maestro can't kick life into Heropanti's daft premise.

But I'll still tell you a little about the bits that are SO bad, they're actually fun in a I-just-got-my-tooth-extracted kind of way.

So Nawaz plays Layla, a kohl-wearing, nail paint applying, flamboyantly dressing, queer comic-villain hypnotising serpents for show and running an international crime syndicate for living. When not quoting Ghalib or bursting into hysterical laughs, the lunatic bombs, stabs, swindles and schemes to loot India's 'aam aadmi' through an app that robs bank accounts. Though it's hilarious to watch the man posing in over-the-top feathery shoulder suits on a wings throne with the seriousness of a photoshoot.

For the briefest duration Tiger Shroff's spy/hacker/desh bhakt/martial arts expert pretends to be a fight-fearing mamma's boy, some know as Babloo, some RJ. Right before he slips back into his usual sprint-somersault routine, Heropanti 2 makes a big hue and cry over Babloo and his butt.

When not at the receiving end of all the senseless pounding and pummelling, a cleavage flashing prom queen pops out of a veterinary clinic pulls out a bullet from his bum and energises Babloo enough to right away shake a leg and more at a costume carnival. Babloo's conviction before the computer is super dubious. Bet he can't even create a PDF file but Heropanti 2 insists he's Hacking ka Kalandar.

Nobody can outdo Tara Sutaria though.

The young woman singlehandedly carries Heropanti 2 into a new realm of stupidity whenever she appears on the screen -- that's like nearly every second frame. There are more Lamborghinis in her parking than expressions on her face.

When she first shows up, Heropanti 2 rubs in her wealth and gaming princess status. Next, she's demanding to strip Tiger in public and confirm an identity determining mole.

Third time, she growls at her boyfriend for touching her only to announce money can buy anything "I can kiss anyone" and randomly planting one on Tiger's lips.

The dumbness just doesn't stop. One moment she's sobbing over a guy's grave, the other she's fantasising about her beau in a stylishly choreographed dance. That she doesn't even pretend to be disturbed by her brother Layla's murderous aggression is the ultimate dealbreaker.

Idiocy is the source of Heropanti 2's outdated thrills. Imagine the intelligence in CBI being reflected in codewords like Plumber and acted upon in threats like "Ab yeh plumber tere saare pipes kholega." 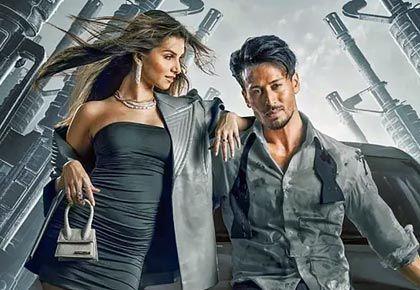 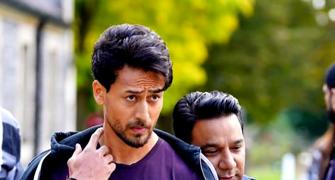 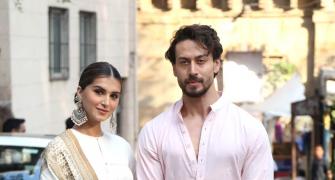 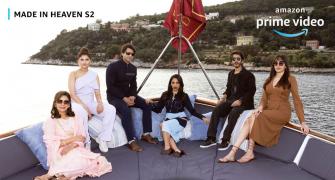 Do Tara and Tiger Make A Cool Jodi?