With a heady mixture of romance, menace, darker events and dramatic thrills, Harry Potter And The Half-Blood Prince, the sixth film in the fabulously successful series, was a smash hit with the critics and audiences worldwide. The highest grossing film worldwide ($930 million) this year, it is now making waves in DVD and Blu-ray versions.

Love is very much in the air in the sixth year at the Hogwarts School of Witchcraft but Lord Voldemort and his henchmen are not resting. Harry Potter (Daniel Radcliff) sees conspiracies around him but he waits for a word or two from the wise Professor Dumbledore (Michael Gambon). Meanwhile, the professor has persuaded Horace Slughorn (Jim Broadbent) to come back from retirement and be the potions teacher.

Harry suspects Draco Malfoy (Tom Felton) to be on a special mission for the Dark Lord. The film also deftly shows the dark past of Voldemort, when he was known as Tom Riddle.

The journey Dumbledore and Harry make to the mysterious world in preparation for the final mission to confront the master evil force is scary and visually stunning. It prepares the audiences for the last book in the series that will come out as two movies. Having the DVD or Blu-ray will also give the fans another chance to see them as the next installment opens next summer.

Among the many pleasures the movie offered are the superb performances, especially by Tom Felton, Radcliff, Gambon and Alan Rickman (as the mysterious Snape).

The disc also includes Warner Bros BD-LiveTM, which allows users with web-enabled Blu-ray players to access additional content and connect and share with other BD-Live users via the My Commentary and Live Community Screening features. Another feature of the BD-Live interactivity is Facebook Connect, connecting the users to their friends from Facebook, and invite their Facebook friends to a Live Community Screening. 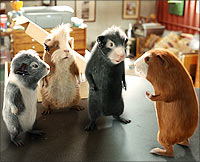 G-Force is another family film, making waves in DVD and Blu-ray versions.

The concept of talking animals that are also spies gave this 3D film quite a bit of appeal, making it one of the hit movies of the year. The Disney film is not exactly in the league of its smash hit Up but this comedy adventure has plenty of appeal.

As critic A T Hurley has pointed out that 'the premise isn't earth-shattering: oddball, unexpected heroes are called on to save the day (Men in Black, Underdog, etc). But the lowly guinea pig has been long overdue to get its moment in the spotlight.'

When the G-Force, a team of highly trained guinea pigs, are suddenly called off by the government from their mission to save the world from an evil and powerful maniac (Bill Nighy), they break loose and try to continue the battle on their own.

Guinea pigs featured are: Darwin, the squad leader (voice of Sam Rockwell), knows failure is simply not an option; Blaster (Tracy Morgan), weapons expert with an attitude also has a love for anything extreme; and Juarez (Penelope Cruz), a martial arts diva is also an alluring creature. And then there is the reconnaissance expert, Mooch (Dee Bradley Baker), and a mole, Speckles (Nicolas Cage), the computer and information pro.

The film had its share of decent reviews. 'Just because it happens to feature a bunch of cute, talking guinea pigs doesn't for one second mean that producer Jerry Bruckheimer's first foray into 3D isn't anything other than business as usual,' wrote The Hollywood Reporter, adding. 'In other words, G-Force is your patented Bruckheimer loud and proud, precisely programmed, turbo-powered thrill ride.'

Buckheimer is famous for its huge hits, Pirates of the Caribbean trilogy and the two National Treasure movies.

G-Force was not a huge hit as the studio's Up which is headed for a $700 million plus worldwide gross. But it is still quite a success.

Extras: The best buy would be the three-combo packet that comes with Blu-ray, DVD and Digital copy. The Blu-ray edition, offers in addition to bloopers and flubs, three music videos the best among them being Jump featuring Nelly Furtado. G-Force mastermind offers the story of the inspiration behind the film. The Blu-ray version also has DisneyFile Digital copy. And then there is a rare look at how Bruckheimer used CG for this film. 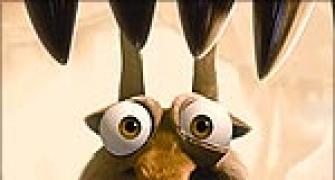 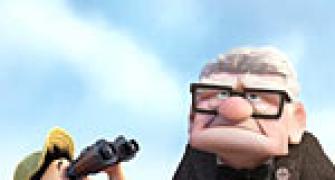 The Up DVD is a must-have!