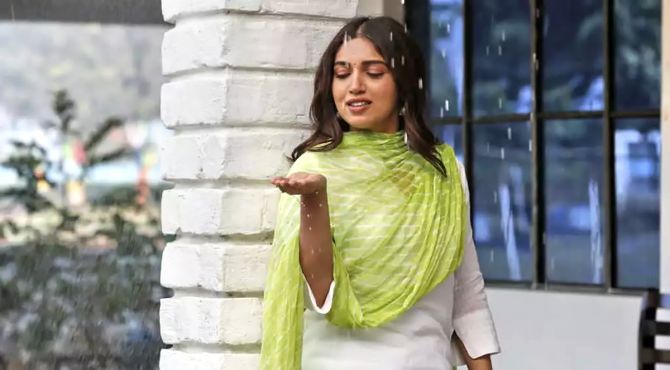 In Chachi 420, Kamal Haasan creates an on-the-spot alter ego named Laxmi Godbole inspired by a bunch of billboard ads while talking to someone in a phone booth.

Can you imagine the yarns he'd weave from inside a mythology strewn spooky palace?

If anyone ever wondered, writer and director Ashok's revenge horror, first released in Tamil and Telugu as Bhaagamathie and now remade in Hindi as Durgamati for Amazon Prime Video has the answers.

Of course, it's not Haasan, but Bhumi Pednekar juggling between prisoner and possessed as voodoo and vendetta collide in the middle of a haunted mansion full of shrieking sounds, pyrotechnical display and imprints of everything between Madhumati and Manichitrathazhu.

It s a dated imagery of same old tricks -- abandoned spaces, rustling corners, rundown stairs, formidable paintings, ominous chandelier, winged creatures and tailed, locks and chains, trembling torches stumbling upon a book of secrets and the camera documenting the bleakness of it all from a cautious distance.

A woman charged with murdering her beau is detained inside an ancient, eerie building, rumoured to be inhabited by the spirit of a violent queen, and the psychiatrist sent to investigate inquiries, 'Is she going through some kind of trauma?'

And blabbering 'kakorrhaphiophobia' or tossing in a tongue-on-fire tantrik only makes it worse.

Even the usually spunky Bhumi appears awfully jaded as the IAS officer and minister's personal secretary grilled by CBI (Mahie Gill) over her boss's (Arshad Warsi shows his cards early on) suspected fraud until paranormal activity grabs hold of her in isolation.

Something wicked is around the corner as Durgamati unleashes an onslaught of jump scares, red herrings and hysterical makeovers before a handful of laughable flashbacks and twists confirm the viewer's worst suspicion -- much ado about nothing.

Durgamati is so caught up with the tired rituals of the 'boo' genre and bruising and battering its heroine, none of its so-called attempts to juice up the premise by creating a familiar people versus politician conflict can salvage the scene.

Especially if your suspension of disbelief isn't compromised to the extent of buying a blank Karan Kapadia as the voice of the voiceless who chucked his Stanford degree to practise kurta activism in rural Madhya Pradesh.

What is interesting is how peculiar the throwaway gibes ('Politics mein kamal nahi sirf keede khilte hain') sound in an Akshay Kumar co-production given his commitment to hyper-nationalist cinema.

For all its aim of concocting a shrewd mix of intrigue and injustice what sticks out is the sheer sloppiness of this tediously formulaic drivel.

Add to that, it is such a poorly performed show.

On seeing the case is going nowhere, she orders everybody, 'It's over.'

If only Durgamati would too. 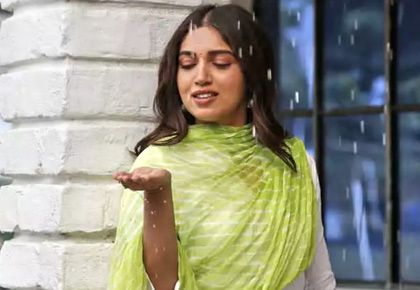