Drishyam 2 fulfills all the criteria required for a blockbuster in terms of story, message, performances and execution, applauds Divya Nair. 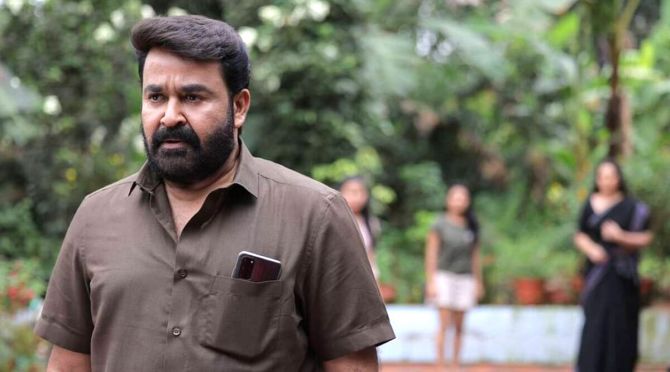 How far will a middle class man go to save the honour and future of his family?

We saw a glimpse of that in Drishyam.

Drishyam 2 takes it a notch higher to show us that no one and nothing can touch his family.

And if anyone attempts, they'd have to first deal with him.

In Drishyam 2, the story begins six years after the crime has been committed.

Georgekutty has progressed from a humble cable TV operator to a theatre owner.

His family is finding new ways to cope and move on from the dark incident but society is anything but kind to them.

Various theories of the incident continue to trigger discussions at the local tea stall, bus stop and among rickshaw drivers.

The eldest daughter still panics at the sound of sirens wailing or if she sees men in khaki anywhere around her.

Yet, George pretends to go about his life like nothing has happened.

From time to time, he also counsels and manages his family from any possible threat trying really well to keep everyone and everything together.

Unlike the prequel, Drishyam 2 is all about if and how George will save his family from the inevitable.

Director Jeetu Joseph leaves behind ample crumbs for viewers to pick on, leading to a riveting climax twist.

Blame it on my anticipation as a thriller fan, or the benchmark that Drishyam set in our minds and hearts years ago, the twist in this sequel was expected.

It may not be as fancy or jaw-dropping as Money Heist, but it will surprise you for a brief moment at least.

George is not perfect and Jeetu doesn't want him to be because there are plenty of loopholes where the perfect plan could have foiled and put George and his family behind the bars.

Watching the film is like sitting next to a weaver and watching the artiste run his fingers and toes demonstrating years of skill and precision that as a layman you can simply be in awe of.

It will engage all your senses into believing that a perfect recipe is being created right in front of you.

Drishyam 2 may not be the perfect arrangement or the design you may have had in mind, but it is beautiful and yet perfect in its own way.

Does George and his family get away with a crime they didn't intend to commit?

And even if they do, what is the director trying to imply yet again?

Jeetu and his team of writers have probably considered all these criticisms well in advance and that is precisely why the arguments are woven in George and Jeetu's defense right from the beginning.

Nowhere does George or the characters that support him imply that a perfect crime exists or that you can get away with something so easily.

But it does make you think.

As a viewer, it divides you between the heart and mind -- between what is right and what you can possibly do about it.

It stirs up multiple debates.

A mother who will go to any lengths to pin down their son’s murderer but at the same time, conceal his crime for their own benefit?

Or a family who has been socially stripped off their peace and happiness by an unfortunate incident that may continue to haunt them for the rest of their lives?

Performance wise, Mohanlal is at his usual best as George, the father and man of the house. Even when he is smiling, you know he is thinking and guarding something.

Meena, as Rani, gives him the right company as the ever worrying, sometimes nagging, loving mother and wife.

Murali Gopy, as the lead investigator, is a smart choice, but what you really miss is a sinister villain like Kalabhavan Shajon, who played constable Sahadevan in the prequel. That would have amped up the nail-biting sequences with some emotional surprises.

Even in their brief roles, Asha Sharath and Saikumar bring in the much needed intensity that eventually holds the plot together.

Despite not getting a theatrical release, Drishyam 2 fulfills all the criteria required for a blockbuster in terms of story, message, performances and execution. 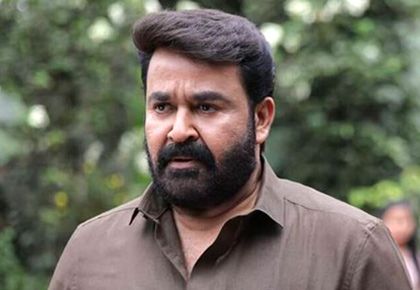