Doctor Strange In The Multiverse of Madness Review

Doctor Strange in the Multiverse of Madness is a roller-coaster ride to be enjoyed on a summer afternoon, recommends Namrata Thakker. When Doctor Strange made an appearance in Spider-Man: No Way Home, the end hinted that something special was in store for all MCU fans.

Well, the second part of Doctor Strange has hit the theatres after a long wait and it has definitely lived up to all expectations.

Staying true to the Marvel Universe, Doctor Strange in the Multiverse of Madness is a cinematic experience with stunning visuals, amazing action sequences and a pretty decent story.

From the very first frame, Director Sam Raimi lures you into his version of an MCU film and from thereon, it only gets crazy mad, scary and a bit creepy. The last two adjectives are new to the MCU franchise, but it's something we can all get use to.

Diving straight into the movie, Doctor Strange and Sorcerer Supreme Wong find themselves in action when they see a monstrous octopus chasing a young girl named America Chavez.

In an alternate universe, Chavez and Doctor Strange were chased by another demon and the latter ended up dead.

This time, Doctor Strange and Wong save America Chavez who has the power to travel through the multiverse and that's the reason the demons are behind her.

Since Chavez doesn't know how to control her power, Doctor Strange decides to keep her safe at the Kamar-Taj (the headquarters of the Masters Of Mystic Arts).

He also approaches Wanda Maximoff for help as he believes the demons were created by witchcraft.

Doctor Strange is taken back when he discovers Wanda is behind the chaos. She wants to control the multiverse to reunite with her kids Billy and Tommy, who are in an alternate universe.

Does Wanda get her hands on Chavez and her powers?

Story wise, The Multiverse of Madness is quite predictable.

After all, if it's a superhero film and a franchise, then you already know who is going to save the day, right?

The makers have thrown in a few twists here and there, with special characters making interesting cameos.

In the acting department, Benedict Cumberbatch delivers and so does most of the supporting cast.

But it's Elizabeth Olsen as Wanda who runs the show. She's witchy, she's scary and has nailed her part so well.

Xochitl Gomez, as America Chavez adds a young, fun and refreshing vibe to the movie. Her banter with Cumberbatch is hilarious.

But her character could have been written better. There are no layers to Chavez, making her seem a one-dimensional character.

Rachel McAdams (Christine Palmer) stars too, but she doesn't have much to offer.

Visually, the film is an absolute delight even when it turns eerie.

Sam Raimi has infused spooky elements well into his fantasy-action directorial, making it a bit different from all the other MCU offerings.

Doctor Strange in the Multiverse of Madness is a roller-coaster ride that any movie buff would enjoy watching on a summer afternoon.

It's high on action and humour and it has been shot spectacularly well. 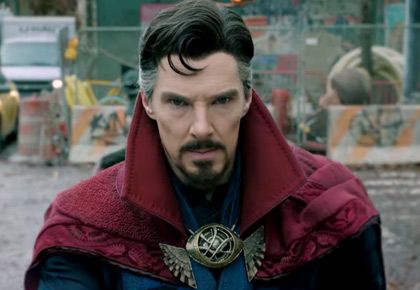