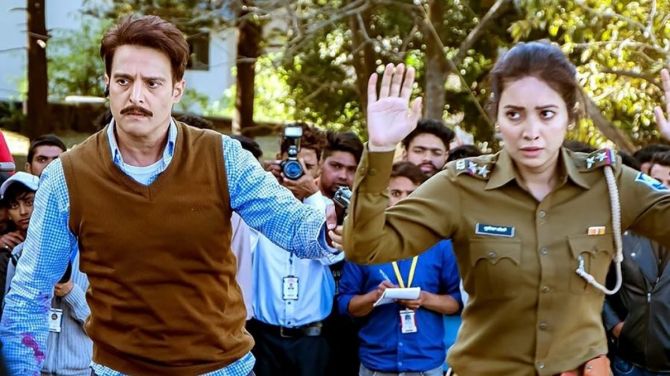 There are times when a writer-director thinks of a movie idea, and it feels superb. But later on, when it's made, it's terrible.

Collar Bomb is aan example of that.

The basic idea about a guy entering a school with a bomb fitted into his collar is not something novel. Yet, it can be explored, if made well.

Sadly, Collar Bomb is all over the place with the story becoming more and more confusing with every act.

Nikhil Nair's writing is regressive and there are so many loopholes.

A posh school, like the one shown in the movie, would definitely have CCTV cameras in today's times, but that angle is not shown.

Secondly, when a mother sees her son being shot right in front of her, however scared she may be, she would probably try to save him rather than shoot a video of the proceedings. Films in the 1990s used to have scenes like these. Things like this make you wonder how old this script is.

There is a scene when a terrorist leaves the scene of the crime to go to an underground tunnel with Jimmy Sheirgill, leaving the hostages unattended. But the hostages, and even the cops and the anti-terrorist squad, wait for no rhyme or reason. The police officer could have easily called in the bomb squad to help, but no, they just wait at the crime scene.

The screenplay is laden with such illogical scenes.

There is one thing I absolutely admire about Jimmy Sheirgill -- he never says no to a project.

Big budget or not, he just wants his part to be meaty enough.

He performs well in Collar Bomb. Still, he can hams on numerous occasions.

Don't bother watching it even if you are a fan of Jimmy Sheirgill or Asha Negi. 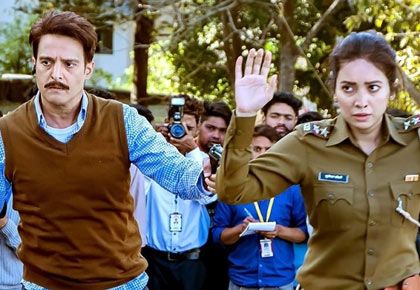